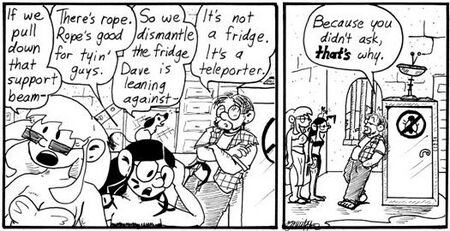 Sarge: You mean you could have turned the bomb off any time!? Why didn't you tell us? And don't say I didn't--

A character on the show has been less than forthcoming about information that would have certainly helped the protagonist figure things out faster. Often, there's a good reason—a Big Secret or an Awful Truth, for example. In reality, the writers just needed a way to protract the story or build the suspense.

There are two ways this trope is generally employed:

Version one: The detectives or crime labs find evidence that their main suspect in the crime couldn't possibly have committed the murder because he had some other alibi. Usually, the secret they are keeping is illegal, immoral or highly embarrassing, but scriptwriters usually fail completely in getting viewers to accept that the perpetrator wouldn't have volunteered that information anyway to avoid going to prison for the primary crime. Usually used ham-handedly in crime dramas to get the Red Herring out of the way and move suspicion off of the patsy.

Cop: You didn't tell us that you were having an illicit affair with your secretary while betting on backroom cockfights.
Perp: You didn't ask.

Version two: Used when a Forgotten Superweapon is in the pocket of a non-primary character. This can often feel a bit like Deus Ex Machina, if the viewer was not given enough advanced warning that the character actually had this in their pocket.

Hero: Why didn't you tell me you had that Applied Phlebotinum in your pocket?
Sidekick: You didn't ask.

Similar excuses include forgetfulness ("Didn't I tell you this?"), not realizing that the other person actually needs the information ("I thought you already knew."), or underestimating the importance of the information ("I didn't think it was important."). The last can be somewhat justified if said information is of an embarrassing nature. A Trickster Mentor, vague prophet, or similar enigmatic figure may deliberately withhold information until asked, either because they can't reveal it otherwise or they need the other characters to keep consulting with them.

This idea is often used when computers or Artificial Intelligence are involved. Because computers are extremely literal, it often happens that the computer or AI knows the answer to solve the problem, but since they weren't asked (or weren't asked correctly)...

A stock response to You Never Did That for Me. Compare Why Didn't You Just Say So? and Didn't See That Coming. Often they Didn't Ask about something that could have prevented the whole mess.

You Can Talk may also figure in the conversation.

Examples of You Didn't Ask include:

Girl with toy: You didn't say I could have a real one.
Businessman: Well, you didn't ask.

Sôsuke: Throwing out his body won't be enough and I think the weapons in the backseat are weighting us down, too. Let's scuttle everything.
Mao and Kurz: Weapons?! (they pull down the backseat, revealing a whole arsenal of rifles, ammo and a rocket launcher) Why didn't you tell us?!?
Sôsuke: (deadpan) I thought I did.
Mao: But you didn't, dumbass...

Karina: You'll make a great father someday.
Antonio: He already is.
Karina: What.

Hal Jordan: "You never asked." Right. Silly of me.

Urahara: You didn't tell me you were a Vizard.
Ichigo: You never asked.

Lootie: (hollering insistently from the castle grounds) Princess Irene!!!
Curdie: "Princess?!" You didn't tell me you were a princess!
Irene: You didn't ask.

Haroun: Dangerous? Dangerous?! You never told me it would be dangerous!
Sinbad: You didn't ask.

Detective James Carter: Why didn't you tell me you spoke English?
Chief Inspector Lee: I never told you I didn't. You assumed I didn't.

Lee: You never told me you spoke Chinese!
Carter: I never told you I didn't. You assumed I didn't.

Daniel: Why didn't you tell me?
Mr. Miyagi: Tell you what?
Daniel: That you knew karate.
Mr. Miyagi: You never ask.

Westley: Why didn't you list [the wheelbarrow] amongst our assets in the first place?

Dorothy: But you didn't tell us about it!
The Nome King: You didn't ask. Perhaps you'd like to visit my fiery furnace!

Mrs. Peel: Do you always obey orders?
Steed: Always. Except when I don't. For example, if I were, perish the thought, under orders to kill you...
Mrs. Peel: Pity you never told me.
Steed: You never asked.

Colonel Jones: As I recall, there was some former Ministry land used as a secret military installation and sold by us to Sir August years ago. And authorized by Father. And this is the site.
Steed: But where is it?
Colonel Jones: According to your map, it's an island right here in the middle of London. It must be where he's controlling the weather.
Steed: Why did you never tell anyone?
Colonel Jones: Nobody ever asked.

Eve: You never told me you could do that.
Roarke: You never asked.
Eve: Remind me to ask, and ask a lot.

Mr. Harrison: If anybody’d have asked me if I was married I’d have said I was.

Character A: Why didn't you tell me you were an all-state hockey player?
Character B: You didn't ask.

Holly: We haven't got a bomb... I got rid of it ages ago.
Rimmer: Why didn't you tell us?
Holly: You never asked!

Doctor: Ace, give me some of that Nitro-9 you're not carrying!

Bernard: Why haven't you told the Minister?
Sir Humphrey: Because he hasn't asked.
Bernard: But how can he ask if he doesn't know there's anything to ask about?

Sarge: Gary, you mean to tell us you could have disabled the bomb this whole time, and you didn't say anything? And don't say it was because I didn't--
Gary: You didn't ask.
Sarge: [[[Angrish]]]

Simmons: Oh my God what's wrong with you? Why didn't you tell us you were a Blue?
Sister: Because--
Simmons: And don't say "because nobody asked"!
Sister: But nobody did ask!
Simmons: Goddammit.

Baloo: Come on, this way.
Wildcat: No, this way.
Baloo: Wildcat, why didn't you tell us you knew the way out?
Wildcat: You didn't ask.

Klump: Now when the coast is clear, we'll jump out of the barrels, steal the Crystal Coconut back, and then swim back to shore.
Krusha: Duh, I can't swim.
Klump: Well, why didn't ya say so before we snuck on board?!
Krusha: Well, you never asked.

Jonny: Whoa! Iris, you never said anything about these things duplicating!
Iris: You never asked.

Mistwalker: One who asks many questions. You never asked that one.

Kim: Shego is the Supreme One? Well, you could have mentioned that!
Rufus 3000: I thought it was obvious.

Lucius: Why didn't you say so before?
Heloise: Oh, so now he likes technology.

Accountant: Why didn't you mention your thousands of dollars in [overseas investments]/[margin purchases}/[gambling losses]?
Client: You didn't ask. I didn't think it mattered.
Accountant: (bangs head on table)