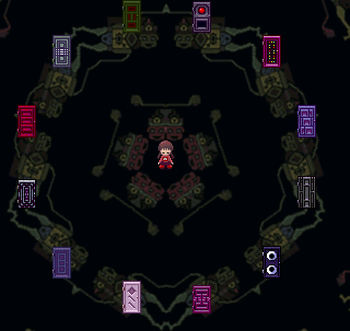 You will find out... that sleeping can be a form of emotional escape and can with sustained effort be abused.
—David Foster Wallace, Infinite Jest

In 2004, Japanese Freeware developer Kikiyama popped open the RPG Maker 2003 game application and thought to herself, "Hey, wouldn't it be an awesome idea to make something that'll creep a lot of people out?". Such is the origin of Yume Nikki (Japanese for "dream diary"), a bizarre adventure game that's been described as "EarthBound meets Silent Hill" or "Eraserhead in RPG Maker" and does not fail to bring on the weirdness factor.

The plot is simple: as Madotsuki, a girl that seems to have an obsession with a single, incredibly depressing video game, all you can do each day is sleep... during which you must travel throughout her dreamscape to collect "effects" and reach new areas in the world. It's extremely open-ended, with little hints as to how to actually progress; really, it's more about exploring the strange and disturbing things that go on in her mind than anything else.

The version 0.10 of the game was released in October 2007 along with an English translation of the effects and menus. Download, and have fun playing this in the dead of night!

For French Tropers, the game was fully translated in Molière's language in 2010 and is available for download here.

See also LSD Dream Emulator, a game with a similar premise, only in 3D and with randomized environments. It is the Ur Example of games like this.

Not related to Mirai Nikki.

Tropes used in Yume Nikki include:
Retrieved from "https://allthetropes.org/w/index.php?title=Yume_Nikki&oldid=1699983"
Categories: