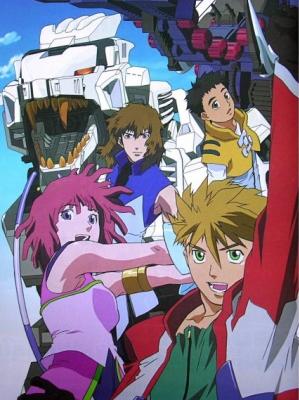 Clockwise from bottom right: Bit Cloud, Leena Toros, Brad Hunter, and Jamie Hemeros. (At the top, Liger Zero on the left and Elephander on the right.)

Zoids: New Century, also known by the Japanese title Zoids: New Century/Zero[1], is the second anime in the Zoids franchise. Originally based on model kit toys, the anime series adds new characters and plot to the toy line, as well as acting as thirty minute toy commercials. Only vaguely related to its nominal prequel Zoids: Chaotic Century, New Century avoids Chaotic Century's dramatic war setting in favor of a Tournament Arc flavored series. The heroes take part in zoid battles, a futuristic mecha Blood Sport where teams of zoids fight each other for prestige and cash prizes. These battles are overseen by the Zoid Battle Commission, which enforce the rules of the sport via satellite-deployed robot Judges that act as referees -- whose decisions are backed by the Commission's Kill Sats when necessary. Naturally, this doesn't stop the heroes from fighting bandits and other criminals outside the Commission's jurisdiction, or prevent unscrupulous warriors from hijacking matches and forcing legitimate competitors into dangerous "unsanctioned battles".

The series revolves around the Blitz Team, a veteran but relatively low-ranking group of zoid warriors. During a match, they encounter Bit Cloud, a wandering junk dealer who specializes in salvaging parts from zoid battlefields. Bit turns out to be able to pilot the Blitz Team's Liger Zero, a zoid previously impossible to control, and Bit promptly joins the team. The series proceeds from there in grand Shonen style, with the Blitz Team fighting battles, gaining rivals, learning about the Liger Zero's mysterious nature, and becoming embroiled in the Zoid Battle Commission's conflict with the shadowy Backdraft Group.

Tropes used in Zoids: New Century Zero include:
Retrieved from "https://allthetropes.org/w/index.php?title=Zoids:_New_Century_Zero&oldid=1836741"
Categories:
Cookies help us deliver our services. By using our services, you agree to our use of cookies.