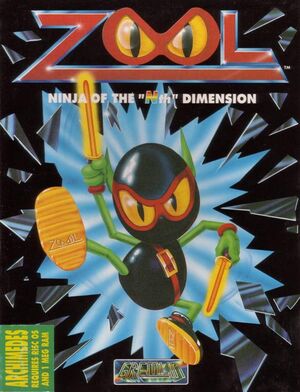 Zool is a video game originally produced for the Amiga by Gremlin Graphics in 1992. It was intended as a rival to Sega's Sonic the Hedgehog. It was heavily hyped upon its initial release, including being bundled with the newly launched Amiga 1200. In 2000 the game was re-released as part of The Best of Gremlin compilation.

Zool is a Gremlin Ninja from the Nth dimension sent to Earth. To complete his ninja training, he has to pass seven worlds filled with enemies.

Not to be confused with the Japanese Nintendo 64 mon game Zoor: Majū Tsukai Densetsu, the Swedish rock band ZooL, or the Ghostbusters character Zuul.

Tropes used in Zool include:
Retrieved from "https://allthetropes.org/w/index.php?title=Zool&oldid=1791087"
Categories:
Cookies help us deliver our services. By using our services, you agree to our use of cookies.