Everything About Fiction You Never Wanted to Know.
(Redirected from Incredible Hulk)
Jump to navigation Jump to search 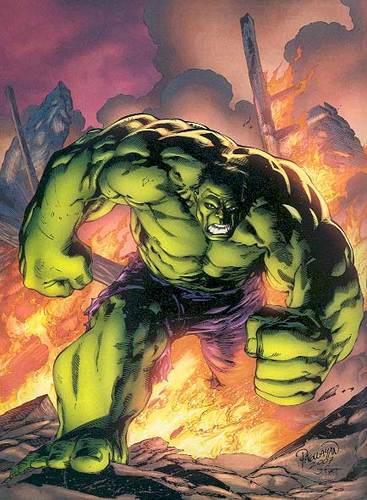 Doctor Banner when he's angry. If you made him angry, there's a fair chance you won't like him at the moment.

The Incredible Hulk is a comic book character. He first appeared in "Incredible Hulk" vol. 1 #1 (May, 1962), created by Stan Lee and Jack Kirby. His original series was rather unsuccessful, cancelled with issue #6 (March, 1963). He was used as a guest star in various series for the next few years. He got his second chance at stardom as one of the two features of "Tales of Astonish". He was regularly featured there for issues #60-101 (October, 1964-March, 1968). The title was then renamed to "Incredible Hulk" vol. 2. He appeared in issues #102-474 (April, 1968-March, 1999). He has starred in several relatively short-lived titles ever since. The Hulk has become one of the publisher's better known characters and is unlikely to be forgotten about.

Marvel Comics' poster child for Super Strength, and the embodiment of Unstoppable Rage and, of course, You Wouldn't Like Me When I'm Angry, the Hulk stars in his own comic book, The Incredible Hulk (not to be confused with the TV adaptation, or the second movie adaptation.) The main premise behind the Hulk is that he is an emotionally repressed man, Bruce Banner, who due to gamma radiation, changes into a gigantic green muscle bound humanoid whenever he loses his cool. The main gimmick behind the Hulk is that he is super strong, and his strength and durability increase the angrier he gets, often to ridiculous levels (somehow handling the core of a black hole, holding apart spheres of matter and anti-matter, holding together a collapsing planet, punching through barriers of spatial or temporal dimensions, occasionally overpowering cosmic entities, etc.)

Needless to say, the Hulk gets into a lot of very violent fights, and runs up the biggest Hero Insurance bill in the whole Marvel Universe, but most of the people he beats up had it coming or otherwise made the mistake of provoking him. He doesn't actively seek out trouble, but the Marvel Universe being the Crapsack World that it is, trouble often finds him, for which he is inevitably mis-blamed. This doesn't do much to improve his disposition, as you might expect.

Notable for both heavily subverting the idea of the Superhero and playing it straight all at once. The Hulk doesn't typically go out of his way to defend the innocent, but he does stick up for those who've befriended him and otherwise ends up doing good with his powers.

As probably the most physically powerful hero in the Marvel universe, the Hulk is normally matched up against Superman in Marvel/DC Crossover events as he's pretty much the only Marvel character who can go toe to toe with him on a even footing.

The Hulk has a multiple personality disorder due to repressing his emotions and many traumatic memories from the constant childhood beatings and hatred from his father, which combined with the uncontrolled mutation of his biology. Because of the nature of his powers, when he switches his personalities, his physical form also changes with his mental state. The five core personalities are:

Usually, Betty Ross, Rick Jones, or his cousin Jennifer can pull off a Cooldown Hug to calm him down. However, it's more often the case that General Ross attacks before he returns to his human form. This is so common, it has a trope of its own on this wiki that was previously named Hulk's Cooldown Hug Corollary.

The Hulk rarely teams up, but whenever he does he always plays the role of The Big Guy as he did on both the Avengers and the Defenders, though later with the Pantheon and his Warbound, Hulk got promoted to The Hero, with Ajax and living stone alien Korg taking over the roles of the big guy in their respective teams.

Much of the modern characteristics of the Hulk were created by writer Peter David during his ten-year-long stint on the title. For instance, Banner's abusive father and multiple-personality disorder were explored in greater depth during PAD's run (elements that were originally introduced in a Bill Mantlo story), which also elevated Rick Jones from perpetual sidekick to a Crazy Prepared Genre Savvy Badass Normal.

The Hulk was recently featured in a two-year-long epic, where a group of superheroes calling themselves The Illuminati (all of them white, male, powerful, and wealthy except for Black Panther who decided not to join as it was wrong) decide to send the Hulk away, to a planet with no sentient life but plenty of plant and animal life, tricking him into boarding a spaceship which they reprogram. However, they failed to take into account a few astral phenomena, and the planet he lands on is most decidedly not devoid of sentient life. It is a savage world, where slavery is common, and he is made a gladiator. With this as his jumping-off point, he soon ends up ruling the world, with a group of fellow freaks and exiles at his side and a beautiful warrior woman as his queen, but as this is both Marvel and the Hulk, happiness is elusive. Soon after his victory, the ship that brought him to the world self-destructs, killing the Hulk's wife and causing widespread ecological damage that will destroy the planet's ecosystem. Unknown to the Hulk, his unborn son survives (and his wife manages to come back from the dead for a while). Hulk blames the Illuminati, and enraged, he and his surviving allies prepare another spaceship... to take back to Earth. This part of the story is called Planet Hulk, and took place during the Civil War (as trying to convince Hulk to either register or actively fight registration probably would have overshadowed most of the other stuff in the series).

This leads into World War Hulk, where the Hulk arrives on Earth with a mind to punish the Illuminati for not only sending him away, not only miscalculating and screwing up their own plan, but through their incompetence, ruining him even after he'd found some peace and done so much good. He learned a lot while on his world, and his rage was possibly the most perfect it's ever been, with even the mightiest telepaths unable to affect him. The promise of this setup lead to an internet meme, taken from one for Civil War where fans could declare which side they were on: "Civil War: You're all fucked when Hulk gets back." In the end, however, Hulk's destruction was largely confined to New York City, and he didn't end up killing anyone, "just" causing a few billion in property damage and beating up some of the more prominent superheroes in the area. Which is hardly a "World War Hulk"; for the Hulk, that's... Tuesday.

This eventually leads to Banner Taking a level in Badass and the next event Fall of the Hulks.