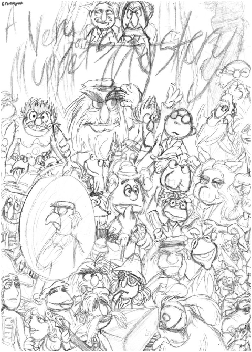 A picture of all of the characters

A Very Muppets Mystery is a fanfic by The Illustrious Crackpot. It's about an OC named Phyllis Pepper, who's a detective, trying to solve a murder. Here's the full summary:

"Phyllis Pepper is the only human in an all Muppet town. But will things spice up when Fozzie brings her a case that leads swiftly to Muppet homicide? An insanely long and ridiculously complicated mystery."

Tropes used in A Very Muppets Mystery include:
Retrieved from "https://allthetropes.org/w/index.php?title=A_Very_Muppets_Mystery&oldid=1526508"
Categories: