Everything About Fiction You Never Wanted to Know.
(Redirected from Anastasia)
Jump to navigation Jump to search 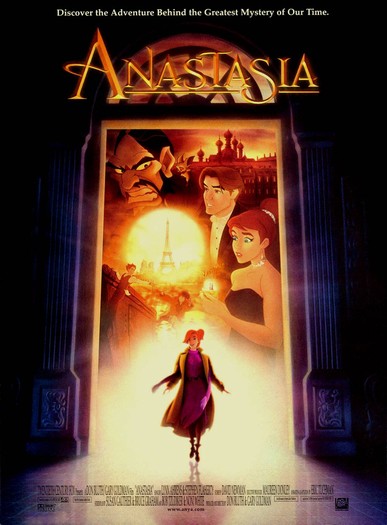 The answer? Anastasia and her family were all killed in real life. Kind of a Downer Ending, huh?

Don Bluth's 1997 very loose adaption of a 1956 Ingrid Bergman film, which itself was already very, very loosely based on the 'life' of the Grand Duchess Anastasia of Russia. The story goes like this...

In 1916, Nicholas II, Czar of Russia, and his family, the Romanovs, were very happy until they were cursed by the evil Rasputin and their people revolted against them for some mystical reason, aided by demons. All of the Romanovs apparently died in the attack except the Dowager Empress Marie Feodorovna Romanova, the Czar's mother. A young kitchen boy helped Marie and one of the Czar's daughters, the eight-year-old Anastasia, escape. However, she and Marie got separated when Anastasia fell from a train and, presumably, died.

Ten years later (1926), Anya, an eighteen-year-old orphan making her way in the world for the first time, decides to head for Paris. She hopes to find her family there, guided by the message "Together in Paris" inscribed on the necklace she was found with in an amnesiac state as a child.

She heads for St. Petersburg, hoping to get a train from there to Paris, but she does not have the appropriate travel papers. Following the advice of a stranger, she locates a young forger and conman called Dimitri in the old palace. For his part, Dimitri is planning on running a con. Rumor has it that Anastasia may have survived the attack, and the Dowager Empress has offered a huge reward to anyone who can reunite Anastasia with her. Dimitri and his friend Vladimir notice that this young woman who has come to them for travel papers looks strikingly like an older version of Anastasia.

The two men put to Anya the idea that she may actually be Anastasia, but don't mention the reward. Vlad then forges the papers to travel out of the country so that they can all go to Paris to meet the Dowager Empress. In the meantime, Rasputin is in limbo until all the Romanovs are dead. His animal sidekick, a bat named Bartok, upon seeing Anya, is pulled into limbo by Rasputin's mystic relic, tells Rasputin about Anya and they realize she must actually be Anastasia.

The rest of the film deals with Anya learning to become more ladylike while Rasputin calls upon the powers of hell to try and kill her. The ending, like most animated movies, is a happy one; however, it is enlightening in a few ways. It's better if you see it.

Contrary to popular belief, this movie was not produced by Disney.

Got a Direct to Video prequel in the form of Bartok the Magnificent,[1] which deals with the plucky little bat impressing people with his "special abilities". It's important to note that this is the only sequel that Bluth has ever been involved with.

Tropes used in Anastasia (Animation) include:
Retrieved from "https://allthetropes.org/w/index.php?title=Anastasia_(Animation)&oldid=1751109"
Categories: