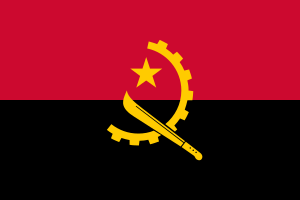 The Republic of Angola, or República de Angola in Portuguese, is a large country in southern Africa. Its capital is Luanda.

Angola is a former Portuguese colony, from which it attained independence in 1975. After that, the country suffered from a civil war that ended only in 2002, and of which the remnants of still linger today. It has many natural resources, including oil, diamonds (second-biggest producer in the sub-Saharian Africa, actually) and arable land, though the nearly thirty years of the civil war largely destroyed them, replacing them with minefields.

Since the war ended, Angola's GDP has gone up rapidly, courtesy of China who is heavily investing in the country's rich resources as well as it's infrastructure to make extracting said resources much easier. Luanda has seen massive reperation and construction projects that erased a lot of the scars the war left and turned it into a comparatively modern and growing city. Areas outside Luanda have yet to see the fruits of this growth though.

The main problem nowadays a separatist movement going on the province of Cabinda (that little part of the country that's separated from the rest of Angola by the Democratic Republic of the Congo). It is not wise to visit there.