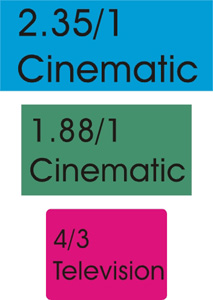 Aspect Ratio describes the visual size of an entertainment medium such as television or film in terms of the image's width compared to its height.

For example, most older television sets in the United States have a ratio of 4:3 (1.33:1, known as "Academy Ratio"), meaning that the image you see is four units wide and three units tall. Widescreen televisions use 16:9 (1.78:1), but this format didn't really catch on until recent High Definition television broadcasts caught on. Interestingly, most (but not all) High Definition cameras used for film production shoot at a 16:9 ratio.

The most common aspect ratios for feature films today are 1.85:1 (generally used for comedy, drama, or other small scale projects without much emphasis on set design or scenery) or 2.35:1 (generally action, science fiction, "epic scope", and other large scale projects). Most older films used the 4:3 aspect ratio until the uprising of television in the fifties led to the film industry seeking out methods of innovation to stay competitive. The widest ratio was Cinerama, which used three projectors to display a 2.89:1 image. One should keep in mind that wider aspect ratio is not necessarily larger; proper IMAX is the largest screen in the world, but only has a ratio of 1.44:1 (13:9).

Because the Widescreen Shot of a feature film is so often different from that of a television screen, a movie image will not fit squarely within a TV screen when released for home video or shown on broadcast television. In order to get around this problem, the aspect ratio of the film must be altered. There are a few common methods for doing this: Pan and Scan, Letterbox, and Visual Compression.

As people still hold onto earlier media as Technology Marches On, some have noticed that older DVDs that advertise themselves as Letterbox are actually designed for 4:3 screens and will not "fill" newer TV sets, despite matching the aspect ratio on a smaller scale. This is because they were released when DVD was taking off in the late 90's when almost every computer monitor and TV screen was 4:3. Some newer televisions have a zoom function for this, though the zoomed image may seem pixelated.

Retrieved from "https://allthetropes.org/w/index.php?title=Aspect_Ratio&oldid=1711326"
Categories:
Cookies help us deliver our services. By using our services, you agree to our use of cookies.