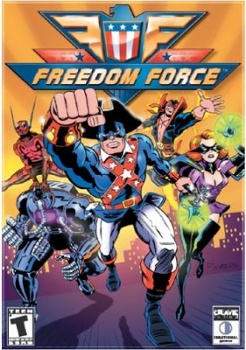 Freedom Force is a two-game series of single-player tactical RPG games made by Irrational Games, and a homage to the Silver Age of superhero comics. It harkens back to the good old days when superheroes were all real paragons of heroism, supervillains were all real Card Carrying Villains, and flying nazi brains with Eye Beams were real flying nazi brains with Eye Beams. And signs showing *BIFF* showed up whenever characters landed a punch.

Freedom Force, as well as its Oddly-Named Sequel 2: Electric Boogaloo Freedom Force vs. The Third Reich, follows the adventures of the eponymous Freedom Force, a team of superheroes given various powers by Imported Alien Phlebotinum "Energy X" introduced to the planet by Lord Dominion, a Galactic Conqueror who tried to conquer Earth by giving bad people superpowers and letting civilization tear itself apart. By the actions of heroic alien Mentor, one shipment of Energy X was instead scattered randomly over Patriot City, America, where it conveniently empowered people who turned out to be superhero material. Over the two games, the Loads and Loads of Characters of Freedom Force took on (amongst other things) such diverse enemies as communists, giant ants, dinosaurs, giant robots, self-copying criminal masterminds, alien invasions, satyrs, time travelers, the third reich, and a Reality Warper.

Freedom Force has a small but active community of modders based at Freedom Reborn, the Strangers mod is as long as the full game and arguably better. In no way related to the Marvel superhero team.

Not to be confused with the NES Zapper game of the same name, by Sunsoft.

Tropes used in Freedom Force include:

Entropy: You get to make a speech when you win, flame-brain, not when you strike out!

Tombstone: i too have lost a love in the mists of time. allow your grief to FUEL your rage, and so shall you seek JUSTICE.