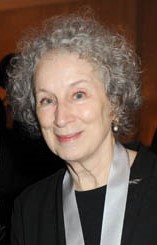 Margaret Atwood (1939- ) is a very prolific Canadian author, having published 12 novels and 15 poetry books, on top of short story anthologies and other works. She is one of the most acclaimed authors in recent history: She won the Giller Prize (Canada's top award for literary fiction) in 1996, and has either won or been a finalist for Canada's Governor General's Award (one of Canada's highest awards for an author) seven times. She has also earned the Arthur C. Clarke Award for best Science Fiction, LA Time Fiction Award and Prince of Asturias Award, and has been nominated or won the Booker Prize five times.

Under the name Bart Gerrard, she was a cartoonist in the 1970s. Also, she's not a bad goalie.

Oh, and she invented the LongPen.

Works written by Margaret Atwood include:

(Copied from her Wikipedia page)

Retrieved from "https://allthetropes.org/w/index.php?title=Margaret_Atwood&oldid=1849272"
Categories:
Cookies help us deliver our services. By using our services, you agree to our use of cookies.