Return From the Stars 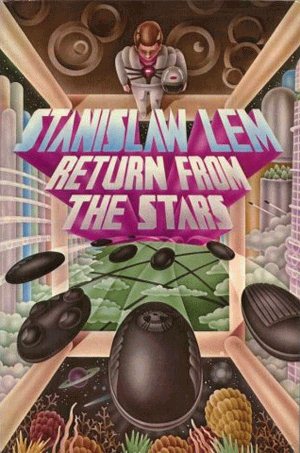 I can't quite put my finger on it, but something seems to have changed ever since I've been here last time.

A 1961 Science Fiction novel by Stanislaw Lem, Return From the Stars tells the story of Hal Bregg, an astronaut who, after completing a 10 years long exploratory mission, returns to Earth where - due to Time Dilation - 127 years have passed in the meanwhile. Of course, technology and society changed immensely in the meanwhile, and the arriving astronauts find themselves classic Fishes Out Of Temporal Water. Hal Bregg is one of the few who decides to integrate himself into modern society on his own instead of being subjected to a long preparatory (and propaganda-sprinkled) educational course.

The future Earth is borderline overwhelming for Bregg at first - if only due to the staggering changes in technology, everyday life and architecture, but what upsets him the most is the "betrization", a treatment given to all children that eliminates violent impulses, but also removes bravado and the courage necessary for risk-taking. The question of whether an utopia of safety and peace is worth sacrificing derring-do is but one of the book's themes.

Tropes used in Return From the Stars include:
Retrieved from "https://allthetropes.org/w/index.php?title=Return_From_the_Stars&oldid=1764948"
Categories: