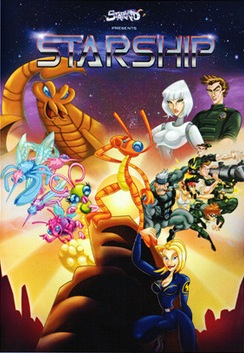 And they're here to get the job done.

On a planet of Big Creepy-Crawlies, a young bug named Bug is just another worker for the Overqueen, but he dreams of leaving Bug-World behind and joining the Starship Rangers, an elite group of humans who explore the galaxy. Bug has spent his whole life exploring the wreck of a Ranger starship that crashed many years ago, watching their video logs so often that he's even learnt the human language, but after the Overqueen decrees that Bug should become an eggplanter instead, it seems as though his dreams will never come true. That all changes when another starship arrives on Bug-World bearing a new team of Starship Rangers, among them the beautiful science officer February. It's Bug's chance to live his dream of being a Starship Ranger, but first he'll have to face off against robots, scorpions, corrupt traitors and true love in order to save his new friends and his entire world.

Starship is a science fiction musical theatre comedy from Team Starkid, the creators of A Very Potter Musical and Me and My Dick. Written by Matt Lang, Nick Lang, Brian Holden and Joe Walker, from a pitch by Walker and Darren Criss ("The Little Mermaid meets Aliens") and with music written by Criss, it was performed in early 2011 and released on DVD and YouTube on April 30. Within a few days of the soundtrack's release on iTunes, it rose to #3 on the iTunes sales charts in the US, the UK, Denmark and the Netherlands, #2 in Australia, Canada and Ireland, debuted at #1 on Billboard's Top Cast Albums chart (beating the record set by Me and My Dick, which reached #11), and even cracked Billboard's overall album sales chart, coming in at #134 after only three days of sales. It's distinct from other Team Starkid shows because the performance, which took place in Chicago, charged for the tickets, and a DVD of the performance was later released through their online store.

You can watch the entire show on YouTube or buy the DVD and the soundtrack from their website.

And no, they did not build this city on rock and roll.

Tropes used in Starship include:

Starship Ranger: We come to conquer... in peace!

Bug: But I swear, I never thought I'd get caught and yelled at for it!

Up: Bug was right! I just needed to learn to kill with my heart!

Up: Well....at least we stuck together!
Other Rangers: *collective groans and "WTF?" stares*

Mega-Girl: All human beings are imbeciles in comparison with robot intelligence. However, you have made all human beings seem like geniuses.
Tootsie: I do like to make people feel good.

Taz: It's your gun, stupid!
Tootsie: That's not what I was using it for earlier, sorry.

Junior: We have a saying where I come from too...God save the queen.
Bug: Oh, great.
Junior:...Lucky for me, God is dead.
Bug/Joey: Oh Crap.

Junior: We have a saying where I come from too... God save the Queen.
Bug: Oh, great.
Junior: Lucky for me, God Is Dead.

Up: Damn that G.L.E.E.! They're always making twisted abominations of everything!

Junior: Yeah, he's about to have an accident with his head and my zapper. Heheheheheh....AND THEN I'LL SHOOT HIM!!