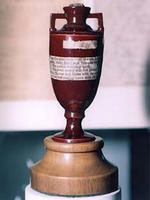 Roughly biennial (18 months and 30 months alternating gaps due to the differing seasons between the two countries) Test Cricket contest between England and Australia, competed over a series of five matches. The 2010/2011 series ended with England retaining the Ashes 3 games to 1, the other game being a draw.

Started in 1882 after England lost their first match on an English ground to the Aussies. A paper printed a satirical obituary for English cricket, declaring that its 'ashes' would be "taken to Australia". England captain the Hon. Ivo Bligh promised to "regain the ashes" on the next English tour to Australia. When England won, Bligh was given a small engraved urn containing the literal ash of a burnt wooden bail, part of one of the wickets used in the game.

This isn't a whole lot of ash, making the container quite comically small for its significance, especially compared to the rather more ostentatious and gaudy trophies of other sports. Nonetheless it's Serious bloody Business, to Australians and Brits at least.

The actual urn is kept at the Marylebone Cricket Club in London - the Aussies (when they hold it) have a replica, which is something that annoys them. This is unlikely to ever change, as according to The Other Wiki Bligh regarded the urn as a private gift and not a trophy, and so it was merely donated to the MCC museum upon his death.

Made more widely-known outside of cricketing circles recently when, after eight consecutive defeats, England won the 2005 Ashes 2-1 (with two draws). However, a combination of English fatigue and Australian determination led to the next series in 06/07 being a 5-0 whitewash for Australia. The 2009 Ashes were distinguished by the two batting sides trying to outdo the other in collapsing more rapidly than seems possible in first class cricket. Australia, in the end, did better at that, and England won the series 2-1, with two draws. There was no repeat of history, however, as England won the 2010/11 series in Australia 3-1, with each of their victories by an innings, the first series win in Australia for 24 years.

Retrieved from "https://allthetropes.org/w/index.php?title=The_Ashes&oldid=1523672"
Categories:
Cookies help us deliver our services. By using our services, you agree to our use of cookies.