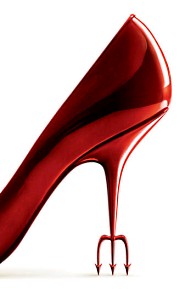 The Devil Wears Prada is a 2006 Film of the Book starring Anne Hathaway and Meryl Streep. It tells the story of a young woman named Andrea "Andy" Sachs (Anne Hathaway). Her first job out of college is for a merciless fashion magazine editor Miranda Priestly (Meryl Streep). It is loosely based on the real editor for Vogue magazine, Anna Wintour (sometimes called "Nuclear Wintour" by her detractors); see The September Issue for a documentary about the real Wintour.

Tropes used in The Devil Wears Prada include:

Retrieved from "https://allthetropes.org/w/index.php?title=The_Devil_Wears_Prada&oldid=1874551"
Categories:
Cookies help us deliver our services. By using our services, you agree to our use of cookies.