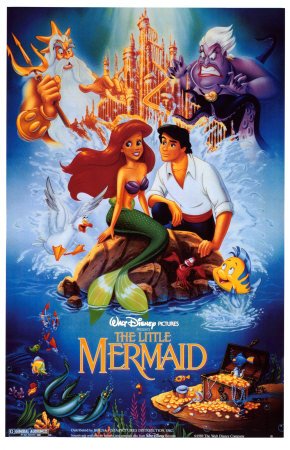 Disney's version of The Little Mermaid is widely considered to be the start of the animated feature film renaissance of the 1990s, particularly for Disney. A loose adaptation of Hans Christian Andersen's Tear Jerker fairy tale, it features a mermaid named Ariel, one of the daughters of the Sea King, Triton. Apparently unique among her kind, she is fascinated by the human world, although Triton has a hatred for humans that makes pursuing her interest quite difficult. One night, a forbidden visit to the surface leads her to fall in Love At First Sight with human Prince Eric, and she ends up rescuing him when his ship is destroyed in a storm. Now desperate to become a human, she agrees to barter her voice to the sea witch Ursula to become a human for three days; if she can receive True Love's Kiss from him within that time, she'll be permanently human. Otherwise, she will be Ursula's slave. Indeed, Ursula is actually manipulating her to turn her into ransom for Triton's crown, and she knows that the only thing Eric remembers about Ariel is her beautiful, beautiful voice...

The surprise hit of the 1989 holiday season, it won Best Song and Score Oscars, and placed Disney securely back on top of the animated film business. It spawned a CBS Saturday morning prequel series in 1992, a Direct to Video Sequel in 2000 (Return to the Sea), and a DTV Prequel in 2008 (Ariel's Beginning). The characters also figure in the Kingdom Hearts video game series, and other tie-in merchandise and media appearances are going strong with Ariel as an official Disney Princess. A stage musical adaptation was launched in 2007, and a dark ride debuted at Disney California Adventure in 2011.

Tropes used in The Little Mermaid include:

The story it was based on exhibits several of the above tropes, but had more of a Downer Ending where the eponymous mermaid protagonist dies, but may eventually be accepted into Heaven through good deeds albeit only if children are good in the world.

Retrieved from "https://allthetropes.org/w/index.php?title=The_Little_Mermaid&oldid=1955028"
Categories:
Cookies help us deliver our services. By using our services, you agree to our use of cookies.