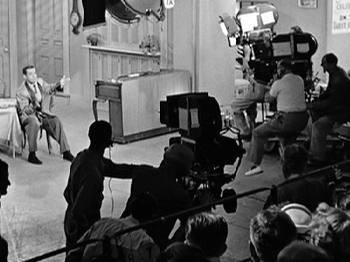 Desi Arnaz demonstrates the Three Cameras technique to viewers of I Love Lucy: The Movie.

The standard sitcom filming technique, popularized by I Love Lucy, and Desilu Studios, and used extensively in other settings, especially news and talk shows. On the whole it doesn't look a whole lot like a stereotypical movie production—the director is off-set behind a wall of video screens, connected to the stage floor primarily by a rat's nest of wires, a wall of video screens and mixing equipment, and various forms of intercoms.

The show is shot with three simultaneous cameras, often before a live audience. This greatly reduces the number of times a scene needs to be reshot for technical reasons (now we do the same scene for closeups, now we do the same scene with two-shots), as well as making editing easier by greatly reducing continuity issues (especially if the actors tend to drift off the script).

The three-camera system and extensions thereof (sporting events can have dozens of cameras) is pretty standard in many live or live-to-tape television shows. Readers with access to a local public-access cable channel can usually learn the details quite cheaply, but essentially the system works as follows:

The talent will usually be individually miked, either with boom mics (movie-style for a sitcom or soap opera) or with lavalier mics (the ubiquitous clip-on mics used in news and talk shows). Cameras are usually equipped with tally lights, which are lights indicating the currently active camera as selected by the video mixer in the control room; these are used both by camera operators (to know when the camera is live) and talent (to know which camera to face and/or avoid, depending on stage directions). Sets are similar to theatrical sets and are often designed to be easily broken down and rebuilt quickly, and for some low-budget productions may consist of little more than chairs, tables, curtains, lighting effects (especially stencils or "gobos") and perhaps an audience. The overall production has a fairly simple rhythm to it, with each camera used in alternation to pick up angles that another camera can't reach.

Although the ability to jam almost everything onto a computer drastically reduces the size of crew required for something like this—many newscasts now use remote cameras, and it's not inconceivable that one person could run an entire professional-grade production with three webcams and a laptop—the basic theory still remains.

A few refinements to this general principle exist. As mentioned before, televised sports events use a variation on this, with as many cameras as the network can afford dotting various strategic points in the stadium (one of the very few good things to come out of Vince McMahon's XFL was the addition of a "floating" camera on zip wires above the field), all coordinated through one central broadcast booth. In addition, cooking shows shot in studios (the archetypes being Julia Child and Graham Kerr) sometimes include overhead views, either shot with a mirror over the stove and prep area (as Julia did) or with a fourth, fixed camera suspended from the ceiling. Finally, such setups will sometimes include handheld or shoulder cameras patched into the main board; they are switched the same way as the fixed cameras. (One particularly off-the-wall adaptation is seen on Paula Deen's show Paula's Party on Food Network; among the several cameras used on the show is a small lipstick camera used by Paula herself on the stage to show the inside of cooking pots and other assorted closeups.)

See Standardized Sitcom Housing for one interesting effect of the Three Camera system.

Retrieved from "https://allthetropes.org/w/index.php?title=Three_Cameras&oldid=1618838"
Categories:
Cookies help us deliver our services. By using our services, you agree to our use of cookies.