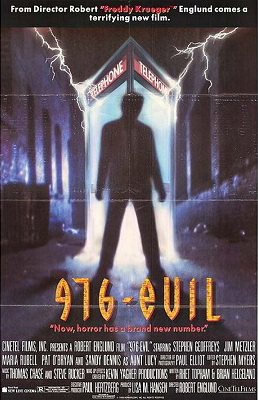 Spike (the bad boy) and Hoax (the introverted nerd) are cousins who live with Hoax’s overly religious mother. They stumble across a mysterious premium-line phone number, 976-EVIL, which appears at first to be just a fun novelty hotline that offers creepy fortunes to those who call, but they soon discover that it’s a direct line to hell--literally. Spike loses interest, but Hoax uses the powers the number gives him to exact revenge against everyone who has wronged him, inavertantly allowing his soul to be slowly taken over by Satan. Spike must race to stem the tide of destruction Hoax is perpetrating, hoping like hell that he can save his cousin’s soul.

Tropes used in 976-EVIL include:
Retrieved from "https://allthetropes.org/w/index.php?title=976-EVIL&oldid=1613870"
Categories: