From Nobody to Nightmare 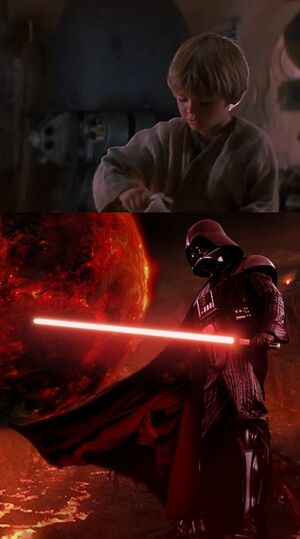 A Sub-Trope of Start of Darkness that involves a non-Badass normal taking Over Nine Thousand levels in badass, whether instantly or over the course of a story, thus becoming essentially nothing but a giant walking, talking bucket of Nightmare Fuel.

Through a series of unlikely coincidences, or through accidental or unknowing actions on the part of the Heroes themselves, or as a result of things which should never have happened—and in most alternate timelines don't happen, but just barely by the skin of their teeth, do happen—someone who might have stayed an insignificant nothing is transformed into a nightmare that grows and grows, absorbing the power to rend civilizations to dust and bring universes to their knees.

For some reason, it seems that From Nobody to Nightmare villains are always more powerful, terrifying, deadly, and threatening than your typical Diabolical Mastermind. This may owe itself to the shock value of the idea that anyone and anything could accidentally become the Big Bad; it's much more comforting to believe that only long years of Card Carrying Villainy could possibly breed that kind of person.

Compare the Diabolus Ex Nihilo. If the character was already a bad guy previously but never a serious one, it's Not So Harmless. Heroic versions may still find themselves wondering "Dude, Where's My Respect?". Frequently, the details of this process are uncovered in the villain's Start of Darkness.

Examples of From Nobody to Nightmare include:

Retrieved from "https://allthetropes.org/w/index.php?title=From_Nobody_to_Nightmare&oldid=1926802"
Categories:
Cookies help us deliver our services. By using our services, you agree to our use of cookies.