Albania is a small country on the shores of the Adriatic Sea - just opposite the stiletto heel of the Italian boot. The Albanian language is, much like Armenian (with which it should NOT be confused), another one of those weird offshoots of the Indo-European family tree, with no particularly close relation to any other European language.

The Albanian word for Albania is "Shqipëria", usually translated as "Land of the Eagle", hence the flag.

Having been passed around between the Romans, Byzantines, Greeks, Bulgarians, Sicilian-Normans, Serbs and Venetians for pretty much her entire history, Albania ended up as an isolated backwater of the Ottoman (Turkish) Empire. The people largely became Muslim and were loyal to Ottoman rule. Albanians were often used as enforcers by the Turks, which sometimes worked but occasionally backfired, as in the case of Muhammad Ali--sent to Egypt to enforce Ottoman rule, he ended up founding his own separate state and turning on the Turks. Lord Byron particularly admired the Albanians and considered them a counterpart culture of the Scottish Highlanders he was familiar with--from a mountainous region, wore kilts and had clans perpetually fighting each other.

When, in 1913, Turkey-in-Europe was invaded by the surrounding Christian nations, Albania was cut off. The Albanians, helped by Great Power realpolitik, managed to remain independent of Serbia and Greece, but large numbers of Albanians were left outside the state. A man born Ahmet Zogolli became its prime minister from 1922-24, then its president from 1924-28 and finally King Zog of Albania until 1939. Unfortunately, he couldn't prevent Albania from being snapped up by Mussolini's Italy, keen to keep the pace with the German conquests of new territory. German occupation eventually followed, and the Albanian people distinguished themselves by collectively rallying round to protect the Jews in their midst, thanks to an extreme cultural case of Sacred Hospitality. Only one Jewish family was found and deported, and Albania was unique in Europe in ending the war with more Jews than it started with.

After the war, Communist partisans under Enver Hoxha (pronounced "Hodgah") took over and Albania became part of Commie Land, though Hoxha's regime wasn't part of the Warsaw Pact - they thought the Soviets were too soft, and aligned themselves with Mao's China instead. At least until they decided the Chinese had gone soft as well and decided to go it alone. Albania became the most isolated and secretive nation in Europe, a sort of European North Korea, until Hole in Flag and the revolutions that swept Europe in 1989-91.

Recently in the UK Albania has become known for a Germans Love David Hasselhoff-type fondness for Norman Wisdom films. This is because they were some of the few Western media allowed in the country under Communism, because Norman Wisdom tended to play cheeky working class characters who stuck it to The Man.

The new, democratic Albania has had its problems, too. Decades of isolation and poverty have wreaked havoc on its infrastructure and economy, especially in 1997 when pretty much the entire country fell for some spectacular pyramid schemes and the end result was rioting in the streets and UN intervention.

Those Albanians left outside the state caused plenty of problems too, but you probably knew that.

Still and all, Albania has pulled itself together again, entering the Eurovision Song Contest, joined NATO on April 9 2009, and applying for European Union membership. 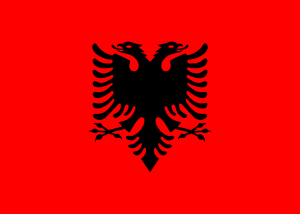 The Albanian Flag
Albania in fiction

Retrieved from "https://allthetropes.org/w/index.php?title=Albania&oldid=1931550"
Categories:
Cookies help us deliver our services. By using our services, you agree to our use of cookies.