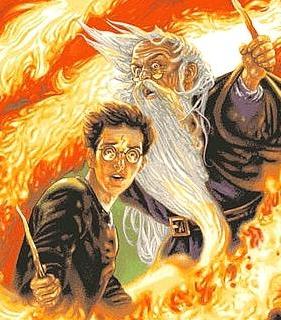 The best-selling book series of all time.

This series of seven children's and young adult novels by J. K. Rowling exploded onto the world literary scene in the late 1990s and has become a phenomenon unlike anything seen before in publishing. Blending fantasy with the nearly extinct British Boarding School genre, it made a literary superstar out of its ex-schoolteacher author, and the characters and settings she created have permanently entered popular culture the world over. Needless to say, there is a multimedia franchise revolving around them, consisting of a series of films, video games and various other merchandising tie-ins, but at the heart of it are the books.

The basic story is simple: Harry Potter is a seemingly normal schoolboy, living with his resentful, abusive aunt and uncle after being orphaned in his infancy, who on his eleventh birthday discovers he isn't really normal at all. His parents were both powerful wizards, and Harry himself is the renowned defeater of Voldemort, would-be Evil Overlord of the wizarding world. Voldemort had attempted to kill Harry when the latter was only a year old, but for unknown reasons, the curse he cast at the boy afflicted himself instead, killing him... sort of.

Harry goes to Hogwarts, the great school of magic, and is happy. There are the normal school troubles -- bullies, unpleasant teachers, the three-headed dog guarding a mysterious something -- but nothing serious, until he sees a dark shadow creeping through the forest. Investigating, he eventually discovers that Voldemort did not truly die. Though his body was destroyed, his spirit clung to life, seeking ways to return from death and resume his campaign of terror.

That year Voldemort is defeated, but each new year brings a fresh confrontation between Harry and the forces of evil. Harry grows stronger over the years, mastering his magic, but so too does Voldemort as he recovers from his death. The wizarding world slips back into war as a final battle looms and a prophecy approaches fulfillment.

Tropes specific to books, other media, and characters in the series:

Tropes prevalent across the whole series:

"Kreacher will not insult Harry Potter in front of Dobby! No he won't! Or Dobby will shut Kreacher's mouth for him!"

Hermione: If you don't stop, I'm going to...
Fred: Put us in detention?
George: Make us write lines?
Hermione: No, but I will write to your mother.
George: You wouldn't...

Dumbledore: [The Gaunts] were known for a violent streak that flourished in the family, due to their habit of marrying their own cousins.

Matthews: "The natural assumption is that any subject that can be taught to students in such a way that their competence in this subject can tested by examination is a science."

Snape: "You are here to learn the subtle science and exact art of potion-making. As there is little foolish wand-waving here, many of you will hardly believe this is magic."

"NOT MY DAUGHTER, YOU BITCH!"

Mr Weasley: (to Harry) You've lived among Muggles; can you tell me exactly what is the function of a rubber duck?

"A safety measure failing? At Hogwarts? Will wonders never cease!"
Kevin: So for this test (Goblet of Fire) they drowned four of their students?
Mike: *chuckling* No no no. They simply tied them up and tossed them into the water, which breaks no laws I can think of.

She only made two real predictions, though, which makes it hilarious when even her random mystical BS turns out to be true (like Lavender's rabbit dying, a student leaving her class, or Umbridge being in great danger). She's also always predicting Harry's early demise. Nobody ever believes her. He dies in Book 7 at age 17. He does come back to life, of course.

"We're not going to use magic?" Ron ejaculated loudly.