Andorra is a dinky little mountain principality wedged between France and Spain, up in the Pyrenees mountains. Originally part of the lands of the Bishop of Urgell, Andorra managed to stay independent of both France and Spain for most of its history, with a few exceptions - it was gobbled up by Napoleon's France in 1812-13, and France occupied her again in 1933 after a wideboy named Boris Skosyreff declared himself sovereign of Andorra and tried to declare war on the Bishop of Urgell. Once again, French troops marched in in 1936 to prevent Andorra getting sucked into the Spanish civil war, and stayed until they were needed elsewhere in 1940. After that, the country was occupied by Germany, and would remain thus until the final collapse of German power in Western Europe.

Andorra declared war on Imperial Germany during World War I, but was overlooked when the peace treaties were signed, so technically remained at war with Germany until 1957, when someone noticed and a separate peace was concluded.

These days, Andorra is a quiet, prosperous little spot. Like many dinky little European principalities, it makes a nice living as a tax haven and its mountainous location makes it a popular ski resort. Its official language is Catalan.

Examples of Andorra in fiction include:

If reference to Andorra appears in any media except for their occasional appearance in sport (mostly skiers, though their football team did play England), be very surprised. There is a play by Swiss author Max Frisch with this name, but the country Andorra it's set in is in fact fictional, a symbol, if you will.

There are a few known references, though: 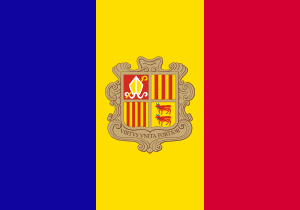 Retrieved from "https://allthetropes.org/w/index.php?title=Andorra&oldid=1771236"
Categories:
Cookies help us deliver our services. By using our services, you agree to our use of cookies.