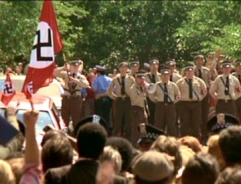 Those Wacky Nazis covers a variety of Nazi stereotypes.

Before we get on with the list, we also suggest you take a look at Nazi Germany, Adolf Hitler (closely associated with Nazis), World War II, Ghostapo, Stupid Jetpack Hitler, and A Nazi by Any Other Name

There were many branches of the Nazi military, each associated with the above subtropes to a varying degree. Most of the more evil, sinister Nazi archetypes tend to belong to the SS, the paramilitary wing of the Nazi party (and the ones who ran the Holocaust). SS members are immediately recognizable by their ominous all-black uniforms. More mundane Nazis may belong to the Wehrmacht, the German military, where they are less likely to be members of the Nazi party at all and more likely to be conscripts. If Nazis are out hunting for La Résistance or Jews, you might encounter the Gestapo, the German Secret Police, though they tend to be less of a threat than their rivals in the SS. Last but not least are members of the German spy service, the Abwehr, who are the most likely to secretly be working with the Allies. Admiral Wilhelm Canaris, the head of the Abwehr, loathed the Nazis and put much of the Abwehr's energy into feeding them false information, smuggling Jews out from under their noses, and unsuccessfully trying to kill Adolf Hitler.

Then there are neo-Nazis. Generally today they tend to be somewhat stereotypical skinhead punks, covered with tattoos, listening to rage rock, with no real agenda besides anger and violence, and generally representing a particularly nasty strain of disaffected youth, often led on by calculating hatemongers with more cynical motives. These are common in cop shows, and are given a particularly chilling representation in the film American History X. Other films, like The 51st State portrays them as asinine thugs, dumber than a box of rocks. It's also important to note that not all skinheads are Neo-Nazis, and making such an association around a traditional or anti-racist skin tends to invite a reaction.

On the other hand, during the earlier days of the Cold War, spy shows, such as Mission: Impossible or The Man from U.N.C.L.E., the protagonists would occasionally take a break from battling the commies in order to put a stop to someone's attempt to reinstate the "The Fourth Reich." These Nazi wannabes would invariably be vaguely Germanic, paranoid, arrogant, obsessed with "discipline," and usually very morally rigid (such as announcing that in the New Order, women would be limited to making babies, their "proper function"). In short, such characters were little more than broadly drawn cartoons. Given that the entertainment industry was is predominantly Jewish, and World War II was still a recent memory for most people, it's not surprising that any Nazi character would be denied even the tiniest human characteristic. As well, some German or Jewish actors who played Nazis, notably John Banner (Sgt. Schultz) and Werner Klemperer (Col. Klink) on Hogan's Heroes insisted that their character never succeed (in fact neither character was a party member, and Schultz sided with the prisoners on several occasions). Another with some (increasingly small) currency today is the fugitive Nazi war criminal, who may well be hiding out in Latin Land or even the continental United States. Perhaps he's working as a dentist...

The sheer use of them as antagonists practically makes them an arguable standout example of The Usual Adversaries.

Luckily for English audiences, a lot of the more functional parts of speech are extremely similar-sounding in English and German, so the lines are often blurred between Poirot Speak and Just a Stupid Accent. Along with the list above, you can include "ja", "nein", "mein(e)" (my), "ein(e)" (one/a), "wo/was" (where/what), "das", "ist", "gut", and many others. Das ist gut, ja?

Any low-ranking Nazi Mook will have a limited vocabulary, consisting solely of these phrases uttered in rapid succession, also called "voice achtung". In real life, the Wehrmacht did not print phrase books to its troops, essentially because most Germans already know a little English and French, and on the Eastern Front, the only words a German soldier needed to know was "Ruky Vverkh!" ("hands up!").

Examples of Those Wacky Nazis include:

Retrieved from "https://allthetropes.org/w/index.php?title=Those_Wacky_Nazis&oldid=1853950"
Categories:
Cookies help us deliver our services. By using our services, you agree to our use of cookies.