Everything About Fiction You Never Wanted to Know.
(Redirected from Asteroids)
Jump to navigation Jump to search 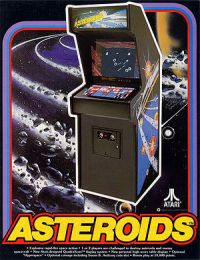 One of the most popular games of The Golden Age of Video Games. Debuting in 1979, it first appeared in the arcade. But was quickly ported to the Atari 2600, and has made its way onto most platforms since.

You control a Space War-style ship in the middle of an asteroid field. All around you, asteroids are floating around. You get points for shooting them; the smaller the asteroid, the more points you get. But each time you shoot any but the smallest, they split in two, and the trajectory is different for both. Oh, and you have to avoid getting hit by an asteroid. Or shot by an enemy ship that wanders by. In a pinch, you can press the panic button and travel through Hyperspace to a random location... which may not be any better (in the sequel Asteroids Deluxe, you get deflector shields instead).

If you were looking for a page about actual asteroids, see Asteroid Thicket.