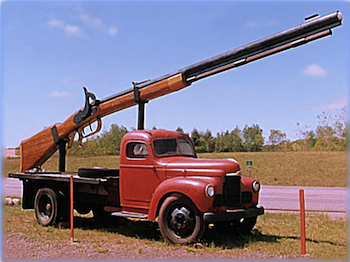 Okay, it may be the one BFG that would end any war, but it takes about one Falkands War[1] to build it, and two Anglo-Zanzibar Wars[2] to reload it after every single shot.

It's awesome. It's flashy. It's unstoppable.

Yes, it seems that the designers put so much time into maxing out the "ultimate" factor of the ultimate attack that they forgot to actually make it usable. Maybe it requires too many resources to use, causing its allure of "awesome" to be lost as fast as your party's money. Maybe it requires some sort of bizarre set-up to enact, making your normal attacks and spells much easier to apply inside of battle.

Whatever the reason, it will get used once, as a test drive, and then never again. Yeah, it's awesome, but you've got a game to win here. Keep in mind, Awesome but Impractical is not Cool but Inefficient, which is where something appears to be awesome, but has no real benefit to using. Sometimes Awesome but Impractical moves carry a situational advantage, or are so Difficult but Awesome that even highly skilled players have trouble using them. Sure, maybe that mini-nuke will irradiate and possibly kill your party, but if you're in a big enough pinch, you may as well try it.

Mind you, if you care about doing cool stuff over winning, they can be quite fun. A competitive player will never look at them twice; this can be one of the good things about being a Noob.

Related to the Bragging Rights Reward and Inventional Wisdom on occasion. See also Useless Useful Spell, Blessed with Suck. Contrast Too Awesome to Use, Boring but Practical, Awesome Yet Practical, Simple Yet Awesome. and Game Breaker. Compare and contrast Difficult but Awesome; there, the focus usually is on Impractical turning out to be Awesome. Crosses with Death or Glory Attack when a miss will result in nasty consequences. Scary Impractical Armor is a Sub-Trope, as well as Impractically Fancy Outfit. In Real Life, this trope is often the reason behind I Want My Jetpack.

Please add only examples whose impracticality is shown within the work. If it works fine in-universe but should be impractical when you think about it, that's Fridge Logic.

Examples of Awesome but Impractical are listed on these subpages:

This All the Tropes site may look awesome, but what has it ever done for you?

Retrieved from "https://allthetropes.org/w/index.php?title=Awesome_but_Impractical&oldid=1932838"
Categories:
Cookies help us deliver our services. By using our services, you agree to our use of cookies.