Azerbaijan, like neighbouring Armenia, is one of the clutch of former Soviet republics in the Caucasus region, where Russia and Turkey meet. "Where Russia and Turkey meet" applies well to the country, as it has long been under Russian rule, but speaks a language which is very close to Turkish. This can be seen in names like Aliyev ("Ali"-"ev", a typical Middle Eastern name with a Russian suffix). The country is mostly Shia Muslim, but the state, like Turkey, is strictly secular. The people of Azerbaijan themselves are a mixture of Turkish, Caucasian Albanian and Iranian, and their nomadic ancestors came into the region from Central Asia along with the Turks in the 1200's; before the founding of Azerbaijan the Azeris were commonly referred to as Azerbaijani or Caucasian Tartars. The area has been conquered by several different empires over the course of the last several thousands of years. Azeri national identity has emerged in the 18th century as local rulers obtained autonomy from Iranian shahs and solidified in the 19th century under Russian rule and in the 20th century under independent Azerbaijani Democratic Republic and later Soviet Azerbaijan.

Azerbaijan's foreign relations are dominated by the result of the 1992-1994 Nagorno-Karabakh War which has left the Azerbaijani province of Nagorno-Karabakh and surrounding areas occupied by Armenian troops and local militia and its considerable Azeri minority forced to flee, while the Armenian minority in the rest of the country was forced to flee to avoid pogroms. The Azeri refugees were then settled into refugee camps where even to this day they live in horrible conditions and poverty. Before the end of the war things got increasingly ugly, with massacres on both sides [1]. The war itself ended in a ceasefire, not that you'd be able to tell or anything, though - skirmishes along the border are all too common. Since the ceasefire Nagorno-Karabakh, or the Republic of Artsakh as it calls itself, has declared independence and has its own democratic government in place (seen by several human rights groups as the least corrupt in the whole region, in fact), though every country is too afraid to recognize its independence, including Armenia itself, for fear of starting another war. Armenia and Azerbaijan have been in talks meant to pursue a peaceful solution to the conflict, though neither side wants to budge or concede anything, so the talks so far have been fruitless. Whenever it finally is settled, it's more than likely going to be in a way that leaves neither side completely satisfied.

That little piece of Azerbaijan on the other side of Armenia you see on the map is called Nakhchivan (the Nakhchivan Autonomous Republic), a semi-independent exclave of Azerbaijan. The reasons that bit of land belongs to Azerbaijan are complicated, but it's mostly due to the fact that it was separated from mainland Azerbaijan by a strip of Armenia called Zangezur. While under Soviet rule the majority Azeri population voted for Nakhchivan to be part of the Azerbaijani SSR. The region is rather impoverished today since Armenia has blockaded its border with it, in response to Turkey and Azerbaijan both blockading their borders with Armenia. This means to get to the rest of Azerbaijan its citizens have to go through Iran. Azerbaijan's relations with Iran have become rather unstable as of late because Azerbaijan has shown itself to be pro-U.S. and pro-Israel, and Azerbaijan is angry at Iran for having good relations with Armenia, causing more problems for Nakhchivan (luckily, it just barely borders with Turkey at one little corner, so it has one friend in the region that actually borders it). This comes despite the fact that northern Iran is home to more Azeris than Azerbaijan itself.

Azerbaijan is rich in oil and natural gas, particularly under the Caspian Sea where new technology can now reach deposits that Soviet drillers were never able to reach. The South Caucasus Pipeline carries this oil and gas to the West - a plot point in James Bond film The World is Not Enough.

The name of the country is sometimes considered an Inherently Funny Words in English-speaking media, largely because it has the letters Z and J in it. It is often referenced when a 'random obscure country name' is needed in media. It has largely inherited this role from Czechoslovakia, which ceased to exist in 1993. The country's name comes from Atropates, a Persian who set up his own kingdom in the area after Alexander the Great's invasion.

In more recent news, Azerbaijan won the Eurovision Song Contest in 2011 and hosted the 2012 contest in Baku. While it went well, within a few days the European Parliament threatened sanctions if the human rights situation in the country wasn't brought up to standard, thanks to the new-found attention the country was getting. 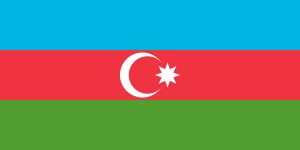