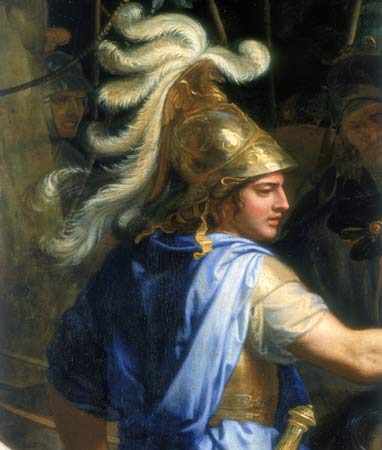 "Alexander the Great was the king of Macedon during the 4th century B.C. who saw the Mediterranean, the Middle East, and Asia and decided they would make a really bitchin' backyard."
—Cracked on Alexander.

Born in 356 B.C., Full name Alexander III of Macedon, he was the son of Philip II of Macedon and Olympias of Epirus. One of those extremely rare historical figures whose actual achievements have regularly outshined numerous fictional portrayals.

He came to power after the assassination of his father by the captain of his bodyguard. He promptly put down a series of rebellions around the Balkans and marched his army into Persia.

Alexander made his way through the Persian Empire, clashing with Persia's forces and mercenaries. Along the way, he seized Egypt away from Persia and was declared pharaoh. After Alexander's forces defeated the enormously numerically superior Persian armies and forced King Darius III to flee the battle, Darius was assassinated by a general who fled with him and Alexander seized control of the empire.

Later, Alexander's forces marched into Bactria and India, where Alexander was forced to stop his expansion under the threat of revolt from his army, who were beginning to wonder if he truly would march to the very end of the world, circumstances permitting.

Alexander married a Bactrian woman named Roxana, who later bore him a son after his death. Alexander died on 323 BC after a period of sickness (suggested to be due to poison, but argued against) in Babylon.

Alexander the Great provides examples of the following tropes:

"He flung himself on the body of his friend and lay there nearly all day long in tears, and refused to be parted from him until he was dragged away by force by his Companions" - Arrian

Depictions, Allusions, And Others