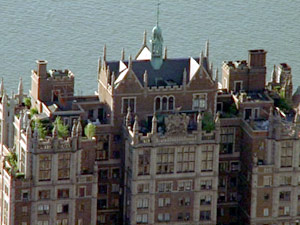 Doesn't look appropriate for a good guy, either.

A big, well-appointed home is a symbol of wealth and status almost anywhere, varying based on facets including its location and relative opulence.

There are many culture specific variations on this these, based on the economics situation of the culture depicted. What is considered an impossibly huge dwelling in one culture may be a standard middle class house in another culture. For more information on how this applies to Japan, see the Anime and Manga section.

If a house is awe-inspiring for reasons other than size, it might be a Cool House. Compare also to Old Dark House and Big Fancy Castle. Contrast Friends Rent Control, where the home (or apartment) doesn't have to be all that large or luxurious objectively, but it's enough so for the location that there's no logical reason why the character should be able to afford it. Also the indication of wealth is not always solid if the home was vacated or offered cheaply for obvious reasons.

Retrieved from "https://allthetropes.org/w/index.php?title=Big_Fancy_House&oldid=1867501"
Categories:
Cookies help us deliver our services. By using our services, you agree to our use of cookies.