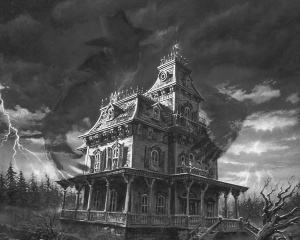 This promising property is just outside Paris.

A spooky house. A staple of Horror. Where Haunted Castles would appear in European tales, the Haunted House takes its place in American stories. It is commonly associated with bumps in the night, strange lights, and a shady history involving violence and terror.

When you enter, the "wind" closes the door behind you. Creepy portraits may adorn the walls and the eyes may literally follow your every move. There are probably cobwebs everywhere. The Ominous Pipe Organ may start playing Bach's Toccata and Fugue in D minor all on its own. Mirrors reflect things that aren't there... when they aren't all broken. The house itself may seem alive, having a mind of its own, yet it may be surrounded by dead trees and blackened grass. Will usually be always in permanent night time, if not having localised Grave Clouds.

It might be a ramshackle abandoned shack standing alone. Or a Big Fancy House maintained by a Creepy Housekeeper. Or a typical suburban home built on an Indian Burial Ground. It has a distressing tendency of killing its way through a family receiving it as an Unexpected Inheritance, and if it gets a sufficiently sordid reputation it will be chronicled by a Haunted House Historian who tries to warn new would-be victims.

This is somewhat a Discredited Trope nowadays, with parodies, Abandoned Hospitals, and amusement park attractions being similarly popular to the straight portrayals. It's also an enduring trope, however, with stories of haunted houses going back at least to the ancient Romans, making it Older Than Feudalism.

Compare Haunted Headquarters, which is any haunted primary setting, and Old Dark House, which may or may not have a supernatural element. Big Boo's Haunt is this trope in video games. Will often end up invoking Never Recycle a Building, for good reason.

Examples of Haunted House include:

Retrieved from "https://allthetropes.org/w/index.php?title=Haunted_House&oldid=1883978"
Categories:
Cookies help us deliver our services. By using our services, you agree to our use of cookies.