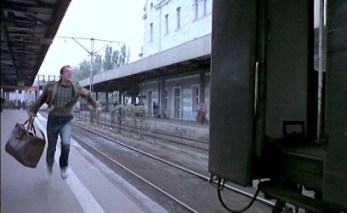 Blind Chance (Przypadek) is a Polish film by Krzysztof Kieslowski (also the director of The Double Life of Veronique and the Three Colors Trilogy) directed in 1981 but only released in 1987 for political reasons. The premise of the film was later recycled in an American romantic comedy, Sliding Doors.

Witek, a university student in a provincial Polish city, has just lost his father and, unsure what to do with his life, decides to go to Warsaw. He makes it to the station at the last minute and rushes to catch his train. He doesn't know it, but whether he makes it is going to determine which turn his life will take.

In the first iteration, he does make it. In the train, he becomes acquainted with a man who, although he was once a victim of a political purge, has remained a committed Communist. Witek is talked into joining the Party and, in the following few years, his earnest commitment results in his rising through the ranks. He is eventually invited to an international congress in France, but as he is about to board the plane, dissidents stage a demonstration in the airport, preventing him from leaving.

In the second iteration, as he is running on the platform, Witek knocks to the ground a railway guard and gets arrested by the police. Sentenced to community labor, he gets to meet political dissidents who convince him to convert to Catholicism and join their anti-Communist movement. He applies for a passport in order to take a plane to France where his fellow activists have contacts, but the authorities have blacklisted him and he finds himself unable to leave.

In the third iteration, Witek misses the train but, while in the station, he spots a female friend, and goes back to his place with her, where they have sex. He decides to stay and complete his medical studies. Remaining politically uninvolved one way or the other, he marries his girlfriend and works on his doctorate. The dean of the university gives him the opportunity to go on a trip to Lybia to give academic lectures. With neither dissidents nor authorities in his way, he boards the plane without hassle.

And just after take-off, the plane crashes.

Tropes used in Blind Chance include:
Retrieved from "https://allthetropes.org/w/index.php?title=Blind_Chance&oldid=1365556"
Categories: