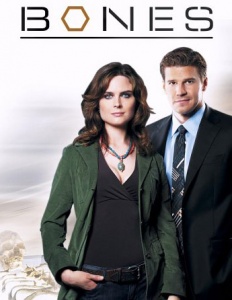 Bones is a television series which started in 2005 and is still ongoing. Temperance "Bones" Brennan, forensic anthropologist, is the pride of the Jeffersonian Institute's medico-legal lab. She's a brilliant scientist who's traveled all over the world in the course of her work and has even used her experience in the field to write a couple bestselling mystery novels. She's the person the FBI calls when a body turns up that can't be identified by normal procedures.

Fortunately for her (and the members of the public who have to deal with her), she has FBI agent Seeley Booth on her side. A former sniper with a young son and a laid-back loose-cannon personality, Booth is Brennan's partner in crime-solving, mutual irritation, and Unresolved Sexual Tension. With the help of a team of "squints" (Booth's terminology for The Lab Rat, cause they're always squinting at things), the two of them solve murders through a mix of forensics, detective work, and occasional violence.

Bones is easy to dismiss as yet another Forensic Drama, especially considering the laxity of some of the science and the better-than life crime recreation technology, but fans are quick to point out that the show's strength lies in its characters. The cases are little more than a backdrop for their interaction and growth. The writing is sometimes uneven and the episodes are more often either brilliant or horrible rather than mediocre, but the dialogue is clever and frequently peppered with moments of genuine emotion. Their behavior and interests help the audience relate to them as One of Us.

Rounding out the main cast of the lab are conspiracy theorist Jack Hodgins, the "bugs and slime guy"; hip and snarky Angela Montenegro, the facial reconstruction and crime scene recreation artist; and No Social Skills Zack Addy, a grad student even more socially awkward than the title character. Season two added Dr. Camille Saroyan, a pathologist who'd been assigned to take charge of the lab. Tension resulted, naturally, although it's mostly been smoothed over now. Season three added Dr. Lance Sweets, an FBI psychologist tasked with doing therapy sessions between Bones and Booth as well as profiling some of their suspects. The show also stars a rotation of "squinterns", Dr. Brennan's ambitious and quirky doctoral candidates.

An often recurring theme is the nature of intellect versus emotion and at what point you should use which. Most of Brennan's team rely on careful logic, and in some cases are bound entirely to it. Meanwhile Booth brings Brennan along on investigations and has to help put a soft touch to her chainmail glove when dealing with people.

A recurring element is wisecracking Hodgins and stoic Zack performing some absurd "test" to help solve cases. One particularly memorable one was putting a frozen pig through a wood chipper. It's a Long Story.

Loosely based on the novels and life of Kathy Reichs.

Has a character sheet. Not to be confused with the comic book series Bone, the animation studio BONES, The McCoy, the Snoop Dogg horror film, or actual bones.

Tropes used in Bones include: