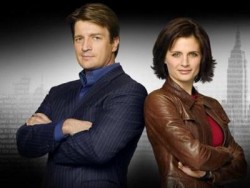 "I often say that Castle is Moonlighting meets Murder, She Wrote having not really remembered Moonlighting and never having actually seen Murder She Wrote."
—Nathan Fillion as quoted here

Fillion plays mystery novelist Richard Castle, who is consulted by Detective Kate Beckett (Katic) of the NYPD after a killer begins copying murder scenes from Castle's books. When an obsessive fan is caught too quickly, it bothers his writer's sensibilities; the capture was too easy. Castle realizes that the man the police have arrested was framed, and helps to capture the real murderer. Enamored with the idea of solving crimes -- and a bit more enamored of working with his beautiful "muse" -- Castle calls in some favors and gets permission to do some research for his new series of books, starring a character based on Beckett. Together, They Fight Crime! Castle and Beckett have some excellent on-screen chemistry going.

An interview with Fillion providing a lot of relevant information can be found here.

Tropes used in Castle include:
Retrieved from "https://allthetropes.org/w/index.php?title=Castle&oldid=1697887"
Categories: