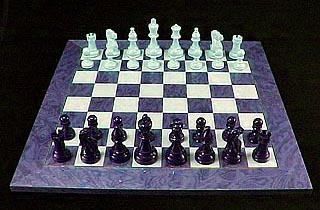 This article is about the game. See Chess for The Musical.

Chess is a Turn-Based Strategy tabletop board game, and is one of the most influential games in history. It is at least Older Than Feudalism; it has more scholarship and study devoted to it than any other game, with only Go coming close; it contains more possible directions a match can go than there are atoms in the entire universe; and it has a play named after it.

The game of chess is thought to have originated in India, possibly as a teaching tool for educating royalty in the practice of leading an army. Its exact origins are Shrouded in Myth; at least one legend attributes the very first game of chess as a reenactment of an actual battle. Whatever its exact origins, the game quickly spread westward into Persia, and from there (with a little help from Islamic invaders) to the Middle East and Europe. The game as it exists now came into being in the 15th century, when the game was overhauled to increase the maneuverability of the pieces and reduce the amount of time it took to play a single game. The most notable changes were the Queen changing from being able only move one square at a time diagonally to being the strongest piece on the board, Pawns being able to move two squares on their first move, and Bishops now able to move any number of squares diagonally rather than being limited to exactly two (an incredible limitation which restricted it to only 8 squares on the whole board, even if it did leap over an intervening piece of either colour).

Chess is played on a checkered board with 64 squares in an 8-by-8 arrangement. The initial setup is literally a Mirror Match; Black's setup is the reverse of White's, so that the respective Kings and Queens appear to be facing one another. (The simple mnemonic is that the Queen is fashionable and should always start on a square of her own color.) Another mnemonic is that Dames are set up on D squares (algebraic notation)

The King is the heart of the player's force. If he is ever in "check," a position in which he can be captured on the next turn, his player must take action to protect his King; it is literally against the rules to leave the King in check. He must either move the King out of the line of fire, interpose another piece between King and attacker, or capture the attacker. The King is also not allowed to move into or through check. This is how victories are accomplished in chess: you trap the opponent in a situation where his King is not only in check, but he has no options that would not result in his King still being in check at the end of his turn. This situation is called "checkmate," and delivering checkmate upon your opponent is how you win the game.

The analytical and strategic nature of chess has led to the popular assumption that being good at chess is a sign of unusual intelligence. The Chessmaster gets his name from his ability to manipulate people and events as if they were pieces on a chessboard as well as his ability to "think three moves ahead." Shows with a rather cerebral and complex plot may employ Chess Motifs to abstract the details of the unfolding story. Finally, it just so happens to be the preferred game of The Grim Reaper (except in the Discworld, where he can never remember how the little horse-shaped pieces move).

There is a great deal of scholarship on how to play chess, including ideas on the best way to respond to to a kingside pawn, a rook, the Nimzo-Indian Defense, or an opponent who's just had a cheeseburger. Without boring you, there are several basic ways to figure out who's winning at any given moment. The player with the material advantage has, simply, more or better pieces ("material") to his name. The player with the positional advantage has more control of the board. The player with better development has more pieces in position to strike or defend, an important consideration when your stronger pieces start way back at home row and (even worse) have their movement options limited by your own pawns. And the player with "initiative" is the one calling the shots, while the other one's just trying to keep up, as one is wont to do when just been engulfed by a Xanatos Gambit. (Or when you're about to unleash your own...)

Here's where the real insanity comes up: advantage in one area can make up for disadvantage in the others. Worse, in some cases, having any of these advantages can actually be a disadvantage: there are situations in which you lose because you have an extra pawn, or because it's your turn. So you gotta pick and choose—especially since it's difficult to have an have advantage in all these areas at once (unless you're way better than your opponent). That said, chess has an Unstable Equilibrium and once a side gets too far behind, they can only hope their opponent blunders the game away. Accordingly, experts frequently resign before an inevitable checkmate.

Chess gives us the oft-misunderstood word "gambit". In chess parlance, a "gambit" is an opening strategy in which material is offered in exchange for positional advantage. While all strategy is about taking risks, a gambit has nothing to do etymologically with something being a gamble. It's actually derived from an Italian wrestling term, dare il gambetto, which describes a type of leg tripping motion. A gambit is a strategy which exchanges a disadvantage of one type in exchange for an advantage of a different type—and not a bet, wager, or crazy stunt with a Million-to-One Chance of success. In games that start out as a Mirror Match, a gambit instantly makes the situation highly asymetrical, but it remains unclear which player's advantage will ultimately prove stronger. If a plan gains a clear overall advantage for one player over the other, that's not a gambit, it's just a mistake on the part of the losing player and/or superior play from the winner.

Also note that one player cannot force a gambit on another. To "offer" a gambit, one player deliberately flaunts a piece (typically a pawn, but not always) as bait, where it can be taken freely, but at the risk of causing the other player to get out of position and be subsequently outflanked. Once the gambit is offered, the opponent can either accept the gambit, trading positional disadvantage for material advantage, or decline the gambit, maintaining (rough) parity of material and position. So we can all use it correctly now. (Also, keep in mind that Genre Savvy has nothing to do with this; because chess is Serious Business, competitive players are Crazy Prepared on most common gambits, and can probably recite to you from memory the sequence of moves you hoped to use on them. This is why The Chessmaster is named the way he is: he not only can see your plan coming from a mile off, he's probably used it himself a time or two. Or six.)

Note too that gambits are only one tactic. Others include forks (where a Knight attacks two pieces or more without being attacked himself, so if you save one, you lose the other), pins (when a piece cannot move as if it did a better piece would be captured), and sacrifices (gambits Up to Eleven in where a strong piece, even the Queen, is given away for a decisive advantage, usually for an attack against the enemy King), which generally take advantage of overloading and interference among the opponent's pieces. Chess strategy has a language all of its own.

Though the modern game has long been dominated by players from the former USSR, with most of the world's top 20 (human) players born there, as of early 2010 this includes only two of the world's top six. At present, the current World Champion is Indian Grandmaster Viswanathan Anand... bringing things to something of a full circle.

"I like the moment when I break a man's ego."
"There are tough players and nice guys, and I'm a tough player."
"There's no one alive I can't beat."


"I add status to any tournament I attend."
—Bobby Fischer, 11th World Champion of Chess

"It's easy to get obsessed with chess."
—Magnus Carlsen, 2nd highest rated player in history

It is forbidden to distract or annoy the opponent in any manner whatsoever. This includes unreasonable claims, unreasonable offers of a draw or the introduction of a source of noise into the playing area.