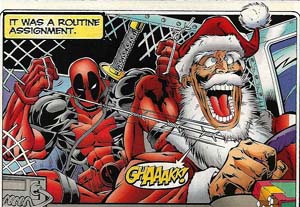 Context would make this more understandable but not any less morbid.

Whenever you try to explain a storyline to a friend, especially in Arc heavy shows, you often have to pepper your dialogue with a "Not Making This Up" Disclaimer.

When you watch a story from the beginning, when a major plot point happens you are often primed for it because of the events of the story that build to it. Then you try to explain it to your friends... which results in blank stares, because they weren't primed the whole story for it, no matter how well you describe it to them.

This is a phrase to use when describing a complicated story point, because really a person does not need to hear the history of Star Trek from the beginning to understand the use of a trope.

There is no need for examples (especially with spoiler tags) to become Fermat's Last Spoiler.

The reasons why this is needed can vary, quite often due to Continuity Lock Out, Mind Screw and/or a Kudzu Plot.

Look below for some helpful suggestions.

Effective example with Spoiler Tag use.

Sometimes you don't even need spoilers-

And you don't want your examples to look like this-

See also Less Disturbing in Context, a closely related concept, and Makes Just as Much Sense in Context, the direct opposite of this.

Retrieved from "https://allthetropes.org/w/index.php?title=It_Makes_Sense_in_Context&oldid=1714098"
Categories:
Cookies help us deliver our services. By using our services, you agree to our use of cookies.