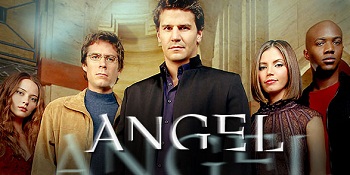 From left to right: Fred, Wesley, Angel, Cordelia, and Gunn.[1]

A Spin-Off of Buffy the Vampire Slayer, Angel debuted in 1999, running for five seasons on the WB network (1999-2004). Part horror, part melodrama, part neo-noir and with a helping of comedy (a given for Whedon), Angel spent its run in the popular shadow of its parent show. Center to everything is the vampire named Angel, cursed by Gypsies into regaining his human soul and living with the guilt of the misery he caused. On Buffy he learned that he could make amends for it and he left Sunnydale to pursue this course on his own. He soon gathered a close group of friends and formed an Occult Detective agency to aid him as he challenges the forces of evil.

To the extent that Buffy was 'a girls' show', Angel as a series had more of a male focus. Think He-Man and She-Ra (except in reverse), coupled with an Anglo-Celtic vibe.

Over the course of the run, the show started with Monster of the Week episodes with a heavy dose of a Detective Film Noir atmosphere, only to evolve into something more akin to modern fantasy mixed with Ancient Conspiracy. Throughout the series it dealt with a complex meditation on the nature of good and evil, with Angel himself being an enigma of both sides. Switching directions on a semi-regular basis, by the fifth season, of the original cast of three, only David Boreanaz as the title character remained. However, the show picked up three regulars from Buffy, followed by two semi-frequent characters, and featured numerous crossovers within the 'verse.

Highly arc-driven and not especially accessible to the casual viewer, Angel nevertheless gained a devoted, if small, following that included many television critics. The show was canceled abruptly in the fifth season, but still with enough time to give a respectable Grand Finale. It was especially frustrating for the fans, because at the same time another announcement was made that Angel had made a respectable increase in viewership. In fact the final episode of Angel beat out the intentional finale for Buffy in viewers.

Like Buffy, Angel now continues in a Canon comic book form, giving fans a chance to see what was planned for future seasons.

Sometimes called Angel: The Series (AtS) by fans in order to distinguish the series from its parent show, BtVS. Not to be confused with angels in general.

Has, to one degree or another, greatly influenced Torchwood, which could be said to be its British equivalent. Just compare the page images.

Note: Angel and Faith is covered on the Buffy page, as it's integral to Season 9.

Tropes used in Angel include:
Retrieved from "https://allthetropes.org/w/index.php?title=Angel&oldid=1912595"
Categories:
Cookies help us deliver our services. By using our services, you agree to our use of cookies.