Everything About Fiction You Never Wanted to Know.
(Redirected from Mega Ran)
Jump to navigation Jump to search
/wiki/Mega Ran (Music)creator 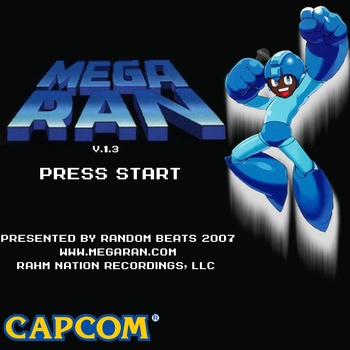 Yeah, pretty much this.

Yo. Lemme tell you 'bout this dream I had//woke up in some weird science lab//stand next to a dude in a white coat//got X. Light on his pocket protector, had this big blue helmet on, and a big cannon in place of my right arm....

Mega Ran is both the Mega Man-themed alter ego of rapper Random, and a Concept Album about said alter ego. What follows is a semi-humorous, hip-hop retelling of the Mega Man series. The plot (such as it is) begins when Random finds himself in Mega Man's body in Dr. Light's laboratory, and goes from there. It is made clear from the first line of the first song that everything that happens is a dream. The album also got a Contested Sequel by way of Mega Ran 9.

Also, Random openly endorses the practice of downloading bootlegs if you can't afford the album. We can't link here for legal reasons, but if you want to pirate it, you can do so with a clear conscience. He even mentions the practice in "Robot City".