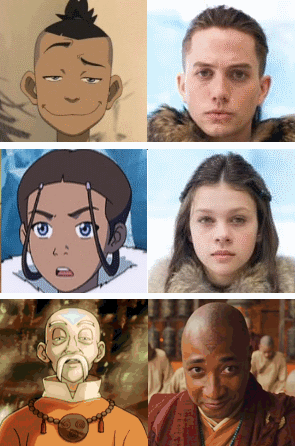 Sadly, this would turn out to be only the first of that film's many problems.


Frozone: Wait, wait, wait. Is that supposed to be me? I sound like a, a... A what? A beatnik! Yeah, that's it, I sound like a beatnik!
—The Incredibles, talking about a cartoon show starring Frozone and Mr. Incredible.

A Race Lift is what occurs when a character's race or ethnicity is changed in the creation of a derivative work. Sometimes this is a method to try and keep things politically correct. People can't argue racism if you have a Token Minority in the cast, but you usually run into problems when you change a character who is originally a proud minority into a member of the majority group. Generally, it works in one of these ways:

Diversifying a Cast
Supporting characters will be changed into a Token Minority to make a cast more diverse. Happens especially in western franchises invented before the 1960s, where non-Europeans in European and American fiction, for all intents and purposes, either did not exist in fictional form at all, or only existed as racial stereotypes.
Minority to Majority
Main characters may be changed from a minority in the area the production is being made to the majority (for example, characters become Caucasian in the United States and most of Europe, Japanese in Japan, Indian in India, etc.), because otherwise people won't watch. This is especially common in older shows and media, but isn't quite a Discredited Trope yet. For a few examples minority characters in older works often carry with them racist undertones.
Majority to Minority
Less often, a work may be adapted by casting a minority actor that the execs consider "popular with non-minority viewers" when the character wasn't initially a part of any minority group. It doesn't necessarily mean that they are aiming for a Race Lift but when the actor proves to have a Box Office draw, producers may ignore past race depictions.
Minority to Different Minority
Secondary characters may be changed from one minority to another, usually because the adapters consider the fact that they are minorities to be their only distinguishing characteristic (or, less cynically, because the character's original race no longer fits the plot function it was intended to: an explorer's "local guide" may need to change race if the area being explored does, for example).
Race Unknown
The adapters may have been unclear on what race the original character was supposed to be, either because they Did Not Do the Research or because the original work was vague on that point. This is especially common when moving from one medium to another - a novel may not describe a character's race, but you can be sure the author will mention it if the casting doesn't match what they pictured in their head. Similarly, live-action western adaptations of anime suffer from the fact that western audiences unfamiliar with anime art styles often find it hard to believe that a blonde-haired, blue eyed character was, in fact, intended to be Japanese by the original artist.
Reverting Executive Meddling
A character who was a majority in the original may become a minority in an update because the producers think they should have been that race all along and were only cast otherwise due to racism. For example, a Caucasian ninja may become Japanese if there's no good reason for them to be Caucasian other than reluctance to cast non-white actors in the original.
Avoiding Unfortunate Implications
It might be "safer" to turn an unsympathetic character into a majority to avoid presenting a negative image of minorities.
Ability Over Appearance
And very, very rarely, it's because the best man or woman to make the audition just happened to be of a different ethnicity.

Before about 1970, it was common for TV stations in the American South to edit shows featuring non-stereotypical black characters to remove their scenes. In cases where the character couldn't be edited out, the episode or the entire show wouldn't be aired. Producers therefore had an incentive to choose an all-white cast even if the original characters were intended to be minorities. (One of the first shows to attempt to break this barrier was Hogan's Heroes, which made Kinchloe the second-in-command and the camp genius so he couldn't be edited out.)

There's also a (much less common) version specifically for scifi adaptations of historical works, where Africans/Asians/Arabs who were intended to be exotic in the original are changed to something that actually would be exotic for humans in the far future. The usual choice is some odd kind of alien.

Simply because of the need for visual diversity, some actors and actresses get the short end of the deal. People of mixed race are especially prone to this because they don't look enough like one ethnicity or the other. And sometimes people are entirely one ethnicity but have the "appearance" of another. There are Caucasian Hispanics with visibly-fair features (Cameron Diaz, for one; Spaniards as a whole), but that is not what the general American viewer sees as a stereotypical Hispanic (at least according to Hollywood and other mainstream media). There are some black people who appear to be white. There are even some Filipinos and Samoans that appear to be black.

Occasionally this process will only be carried out halfway, with a previously ostensibly white character being retooled as someone with a secretly mixed background. In the United States, it has often been common for an especially daring or renegade character to turn out to have American Indian ancestry, if only to emphasize their "wildness". This is plausible because racial mixing with Indians, while not uncommon, was never as widespread or ubiquitous in the U.S. as it was in Mexico or even Canada, partly because there were far fewer Indian people for breeding material; the result is that many white and black Americans have bloodlines that are so diluted that they can claim to have Indian ancestry without actually looking the part.

In Fantasy stories based on Literature, Comic Books or Manga, many times the name of the ethnicity never comes up because it wouldn't exist in that world. When that happens there can be serious arguments and flame wars over what ethnicity a certain character is, based off of the Fantasy Counterpart Culture that might have been used. Their physical appearance might not have any particularly telling markers and clothing can just be added flavor. So if there is an adaption of that work and fans have their own expectations of a particular ethnicity you can guarantee a flame war.

Whether or not a Race Lift is acceptable or Unfortunate Implications depends heavily on the individual work and the opinions of the individual. Just remember to avoid turning this page into a flame war when adding examples and comments.

If a character in a work changes their race within the storyline, it's Black Like Me.

Often involves an Adaptation Dye Job. See Gender Flip when an adaptation changes a character's gender instead of race. See Divine Race Lift when gods are portrayed as a race different from their traditional representations.

Examples of Race Lift include:

Artemus Gordon: (picking out disguises) How about this? You could come as my manservant.

Jim West: (excited stereotype Negro accent) Why, yessuh, Masah Gordon, Why I swears, I'd be delighted, I'll sing, I'll dance for ya sir and I swear, none of the other white folks'll know that (in normal voice) I'd rather shoot myself than play your damn manservant.

"We regret that our original creative direction for Liar -- which was intended to symbolically reflect the narrator's complex psychological makeup -- has been interpreted by some as a calculated decision to mask the character's ethnicity."

Maybelle: But they wrote it.

Queen Isabelle was there, she'd had a few. "Chris gon' find Ray Charles!"

"Who do they want before they want an Asian?
A Persian, or a Cajun, or an Indian,
or an American-Indian, played by a Mexican..."

SLAM Gaming‏ (@SLAMftw): Can someone tell me what’s wrong here? 😂(via u/fasteddeh) <screenshot>
[about 400 replies, mostly pictures of surprised black men or humorous "guesses", such as noting that in statistics on the screenshot "his weight is off by 5 lbs"]
Christian McCaffrey (@run__cmc): I don’t wear a hand warmer over my belt cmon Madden 🤦🏼‍♂️ <retweet>
George Kittle (@gkittle46): Biceps aren’t big enough honestly
Madden NFL 20 (@EAMaddenNFL): Biceps looking on point over here...💪 #Madden20 <screenshot with patched model>
brian combs (@brianc253): Why does he still have his hand warmer 🤦🏻‍♂️
Matthew MaCoy (@YaBoiMaC0y): Because it’s EA. They can’t get EVERYTHING right
[about 1900 other replies of this sort]
Lisa McCaffrey (@LisaMcCaffrey6)[3]: Sorry you had to find out this way. @87ed may not be your real dad. 😂 <retweet>