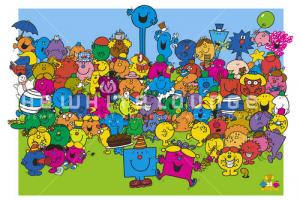 That was the Mr. Men's 25th Anniversary

Once upon a time, there was a man called Roger Hargreaves. In 1971, his son asked him the question, "What does a tickle look like?" he answered it by creating Mr. Tickle. This became the first in a series of books about the Mr Men and Little Misses.

The series involves a various abstract people (mostly circles with arms and legs) who each have a distinctive characteristic which defines them, and are named after that characteristic (Mr. Forgetful, Little Miss Trouble, Mr. Wrong, Little Miss Wise, etc.) Each of the original books stars one of the characters, who has a brief adventure revolving around their character trait. And the sun has a face on some occasions.

There have been two animated series based on the books. The first The Mr Men And Little Misses was based closely on the original stories. The second The Mr. Men Show is a sketch show featuring the characters.

Tropes used in Mr. Men include:
Retrieved from "https://allthetropes.org/w/index.php?title=Mr._Men&oldid=1051951"
Categories: