Star Trek/Recap/S2/E15 The Trouble With Tribbles 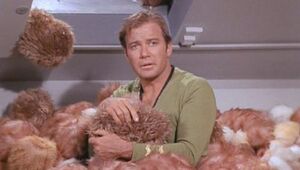 Captain Kirk and Spock are quizzing Chekov about Deep Space Station K7 and the race to settle Sherman's Planet. Midway through the quiz, however, a Red Alert is sounded. The Enterprise has received a Priority One distress call from the Space Station (meaning an emergency of incredible proportions). Racing to the bridge, Kirk orders the Enterprise to rush to the station as fast as possible.

Upon arrival, Kirk demands to know what the emergency is, and is informed that the undersecretary of agriculture, Nils Baris, is on the station and is scared of sabotage. Since Baris has the authority to issue the emergency call, Kirk can do little, despite the fact that the grain they were summoned to protect does not quite rate a Priority One distress call. He authorizes two guards from the Enterprise to protect the grain, and begins shore leave for the rest of the crew. Shortly after, Captain Koloth, a Klingon, arrives demanding shore leave for his crew. Kirk acquieses, in part because he has no legal reason to say no.

Elsewhere on the station, Chekov and Uhura have been shopping and are taking a break in the station's bar when Cyrano Jones walks in, trying to sell useless crap to the bartender (who seems to be used to him). This being the 60's, Uhura is immediately captivated by a purring ball of fur and buys it despite never having heard of the species before and probably having a rule against pets on the ship. The tribble begins breeding like mad (one litter per tribble per about twelve hours, ten or so to a litter), and the crews' first instinct, which they follow, is to pet and coo at the creatures (Spock determines that the purr has a tranquilizing effect on the human nervous system), which does not improve work efficiency. Dr. McCoy determines that one half of the creature's metabolism is geared to reproduction.

Back in the bar, Scotty, Chekov, and another guy are trying to have a quiet drink when a drunk Klingon starts mouthing off. Chekov immediately wants to assault the Proud Warrior Race Guy but Scotty, remembering their orders to avoid trouble, keeps Chekov in line. However, Scotty throws the first punch after the Klingon makes a remark about the Enterprise, which leads to a brawl. Security restores the peace and the involved crew are dragged back to the ship. Nobody will tell Kirk who started it, so he confines everyone to quarters and sends them off, keeping Scotty behind to ask him who started it. Scotty tries to evade the question, with amusing results.

Kirk begins to see just how serious the tribble problem really is when his chicken sandwich and coffee comes out covered in tribbles. Scotty explains that they're in more than just the food processors, probably through the vent system, which means that the tribbles have likely gotten into the grain supply on the station. Upon arrival, he attempts to open a door to the grain bins, but as it's stuck, tries the overhead door instead (even starship captains do stupid things sometimes. Even as stupid as that.) He is deluged by tribbles. It is of course now, and not till now, that McCoy realizes that if they hadn't fed the things, there would have been no breeding explosion. The tribbles turn out to be dead, giving the Captain a tip-off that the grain was poisoned. Back in the station commander's office, Koloth confronts Kirk about the bar brawl before demanding that the tribbles be removed, since Klingons can't stand tribbles (the feeling is mutual). As the guards go to leave, Baris's assistant, Arne Darvin, enters the office and has the same reaction to the tribbles that the Klingons have. Kirk arrests Darvin and tells Koloth to scamper off.

Back on the ship, Kirk is surprised to find that all the tribbles are gone. After some difficulty getting his senior officers to answer the question, he finds that Scotty beamed them into the Klingon engine room "where they'll be no tribble at all." All the humans laugh, and if you look closely at Spock you'll see him arching his eyebrows as an outlet for the feelings his logical Vulcan status won't allow him to express.