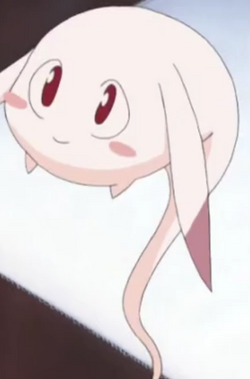 Can't be seen by people. Move along.

A cute widdle creature typically consisting of fur, big eyes, maybe a Big Smile, and little else. It's probably biologically unfeasible, if not downright impossible, but who cares? It's stupidly huggable, and if the show is Merchandise-Driven, it will probably be a top seller. In many cases, it will become an easily-recognizable symbol for the show/series/whatever. All together now: "Awwwww..."

May double as Non-Human Sidekick types, but the main purpose of these creatures is to be irresistibly cute. Sometimes, they are unconventionally cute. Their natural habitat is the Sugar Bowl, but they have been known to wander far and wide.

Depending on the series, there can be either only 1 or 2 types of cute characters, contrasting the rest of the cast. In others (most commonly those taking place in Sugar Bowl realms) the most, if not all the cast is like that.

The robotic counterparts can be found in Cute Machines

If it's so ugly it's cute, it's Ugly Cute. If it's not so lovable, it's a Small Annoying Creature. If it's appealing but ferocious, it's a Killer Rabbit. If it's really not conventionally cute, then it's What Measure Is a Non-Cute?. If it's one of the bad guys, it's an Adorable Evil Minion.

If really unlovable, it's The Scrappy.

May cause Cuteness Overload. May be Yet Another Baby Panda.

Contrast BIG TIME with Eldritch Abomination, and also contrast that with Did We Just Have Tea with Cthulhu? if it's a nice monster.

Examples of Ridiculously Cute Critter include:

Retrieved from "https://allthetropes.org/w/index.php?title=Ridiculously_Cute_Critter&oldid=1967634"
Categories:
Cookies help us deliver our services. By using our services, you agree to our use of cookies.