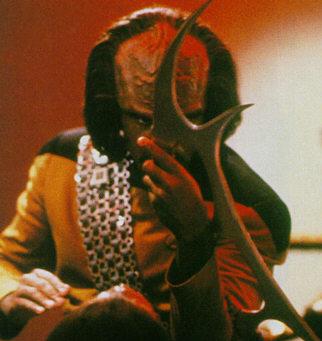 Today is a good day to die.

A specific subtrope of Blood Knight, the Proud Warrior Race Guy seeks battle and bloodshed because his culture teaches that doing so is the greatest source of personal honor and Glory Seeker. This Proud Warrior Race will often be based on one of several real world cultures who are perceived to have acted this way, such as the Samurai, Spartans, Vikings, and Mongols. They are often a Martyrdom Culture. The Proud Warrior Race Guy is almost always a hero. If evil, he will probably be the Worthy Opponent.

"Proud", in this case, meaning "Psychotically Violent". Critiques of this position will be met with: "You do not understand". May occasionally overlap with the Exclusively Evil race, though the two are usually differentiated by the Proud Warrior having a strict Code-of-Honor, while the Chaotic Evil race has no real rules and does cowardly or underhanded things. If the Code-of-Honor is too alien for humans to understand, or too xenophobic to allow cooperation, then the heroes will treat the two groups as the same. The better sort of Code of Honor will enforce Would Not Shoot a Civilian, although often because civilians are dismissed as too weak and cowardly to be good fighters, and so they get passed over in the search for worthy enemies.

While most commonly seen in science fiction programs in the guise of Rubber Forehead Aliens, the Proud Warrior Race Guy is not limited to that genre. Consider Hawk in Spenser For Hire, B.A. in The A-Team, and Tonto in The Lone Ranger or Kato in The Green Hornet. This trope currently tends to be limited to SF because applying it to human races really skirts the bounds of current racial sensitivities. You don't see a lot of the Noble Savage anymore either, except as alien races, for the same reason.

Species that are essentially aliens based on predatory animals, such as the Catfolk often found in many Science Fiction works, are also apt to be of this type.

Interestingly enough, the best-known characters of this type in recent TV history not completely covered in makeup and prosthetics (Worf, Tyr, and Teal'c) are all black; Ronon Dex is played by a half-Hawaiian actor wearing his hair in dreadlocks. Whether (and if so, why) this is a key component of the Proud Warrior Race Guy is an open question (see also Scary Black Man). It may be because of the Unfortunate Implications of having a warlike race of white people who believe themselves to be superior to other races.

A variation on this that has come into existence very recently is the Proud Soldier Race-a more low-key version more like the modern military rather than a warrior culture, with more focus on drilling and discipline than just strength at arms. These guys have a tendency to be more technologically advanced and more focused on expansion than conquest-they don't see the harm in dishonorable tactics but they're pragmatic, not ruthless; The Proud Soldier Race Guy isn't likely to cause any more harm than absolutely necessary to get what he wants.

See also Blood Knight and Barbarian Tribe. See Warrior Poet for what happens when the Proud Warrior Race Guy becomes more developed. Often is fond of being In Harm's Way, and is a Glory Seeker wanting to be Famed in Story. They often are of the mistaken belief that this means they have a Badass Army, but often are proven wrong. May be from a Martyrdom Culture. Frequently crossed with or has strong elements of the Noble Savage. Being a culture singularly focused on the warrior way, anyone performing non-warrior roles frequently suffer from Klingon Scientists Get No Respect.

Compare and contrast with Humans Are Warriors. Also compare Proud Scholar Race Guy and Proud Merchant Race for different kinds of hats a species can wear.

Retrieved from "https://allthetropes.org/w/index.php?title=Proud_Warrior_Race_Guy&oldid=1935024"
Categories:
Cookies help us deliver our services. By using our services, you agree to our use of cookies.