Everything About Fiction You Never Wanted to Know.
(Redirected from Useful Notes/Peace Through Superior Firepower)
Jump to navigation Jump to search 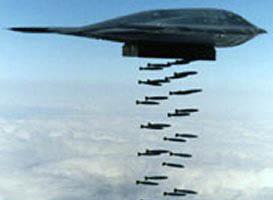 The Russians have their Mnogo Nukes. The Americans ensure Peace Through Superior Firepower via their 5,113 nuclear warheads (September 2009), of which about half are in storage.

As the most powerful military on the planet and one of the most frequently appearing in fiction, the Yanks With Tanks have their most capable weapons easily to hand. The fact they like to Nuke'Em helps.

We're again breaking down delivery systems via type. The US defence industry has merged and de-merged a great deal since 1945 (Rockwell and McDonnell Douglas are now part of Boeing, Northrop and Grumman merged a while back, Lockheed and Martin-Marietta did as well, and several other examples) and so manufacturer names aren't included.

Welcome to a world of Titans, the deadly Davy Crockett and some concepts:

Retrieved from "https://allthetropes.org/w/index.php?title=Peace_Through_Superior_Firepower&oldid=1712194"
Categories:
Cookies help us deliver our services. By using our services, you agree to our use of cookies.