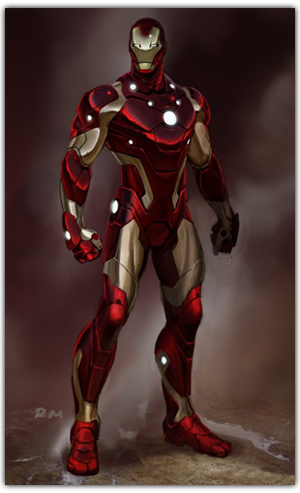 Go ahead, hum that Black Sabbath song. You know you want to.

Tony Stark was a playboy billionaire industrialist until a battlefield explosion left him with a damaged heart that threatened to kill him. Captured by the enemy forces, he is forced into manufacturing weaponry to aid them. Instead he secretly designed and built a suit of armor in a cave, with a box of scraps to keep his heart beating and to escape from his captors, and in the process became the superhero known as Iron Man. The character first appeared in Tales of Suspense #39 (March, 1963), created by writers Stan Lee, and Larry Lieber, along with artists Don Heck and Jack Kirby. He has served as the protagonist of several series since that time.

Currently,[when?] he can be found in Invincible Iron Man -- a rather character-driven title that deals with the troubles of Tony Stark, as well as the politics of Iron Man. The writer Matt Fraction has modeled the plot after the movies to some extent to make it a feasible jumping on point for new fans.

Until the end of Secret Invasion, there was a second title, Iron Man: Director of S.H.I.E.L.D -- a politics and espionage-based book, dealing with Stark's role as head of the international security organization. The last few issues were handed to Iron Man's ally War Machine, who has now been granted his own solo series, called "Iron Man 2.0", which is his third (after the 1994 and 2009 ongoing series).

As of the dawn of the Heroic Age, Stark is rebuilding his financial empire from scratch. His vehicle to make this happen? Using technology provided by Danny Rand combined with his own repulsor technology has formed one of the most astounding sources of clean energy ever seen. He's offering for investors to get in on the ground floor or be flattened by him in five to ten years. And the best part? His new company won't be financed by manufacture of a single weapon.

In non-comic media, a movie based on the character, Iron Man, was released in May 2008 with Robert Downey, Jr. in the title role. It did well at the box office, and as of June 2008 had a 94% approval rating at Rotten Tomatoes, making it the best-received movie of the year, tying with The Dark Knight. This movie was followed by a sequel and other works in the Marvel Cinematic Universe. Prior to the movies, Iron Man had animated TV series in 1966 and 1994; for information on those, see here and here. In the wake of the movies, Iron Man: Armored Adventures is a cartoon that takes another approach to the mythos by having Tony and his friends be teenagers. Additionally, there is a 2011 anime by Madhouse, well-received by fans in concept partly on the basis that 1) the Japanese know Mecha, and Iron Man has a Mecha Suit, and 2) it wouldn't be that far off the mark for the character to have adventures in Japan, since he's a businessman with corporate branches and rivals all over the world.[1]

Has no actual relation to the song by Black Sabbath (which was inspired by him, but deliberately written to be as different as possible). Not to be confused with The Iron Giant, which was based on a Ted Hughes novel entitled The Iron Man. And please for the love of God, don't confuse this with Tetsuo: The Iron Man. Much pain will be spared from you.

The incident, although a "filler" issue as the comic was transitioning to the team of John Byrne and John Romita, Jr. at the time, was referenced much later on, when Shalatov needed Stark's help to stop the rampaging Titanium Man (the original, Boris Bullski).

]
Retrieved from "https://allthetropes.org/w/index.php?title=Iron_Man&oldid=1846444"
Categories:
Cookies help us deliver our services. By using our services, you agree to our use of cookies.