Ultimate Defence of the Realm

Everything About Fiction You Never Wanted to Know.
(Redirected from Useful Notes/Ultimate Defence of the Realm)
Jump to navigation Jump to search 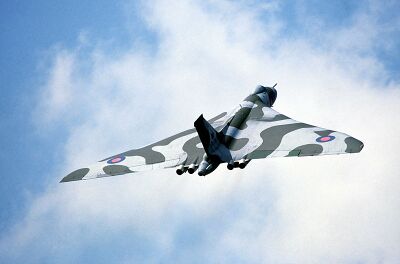 The United Kingdom detonated its first atomic bomb in 1952, but had worked on the Manhattan Project (with facilities in Britain, Australia, and Canada) before then.

Fewer delivery systems, but all noteworthy enough to make this a separate entry. British spy fiction likes to point out sometimes that we aren't totally dependent on the Americans and there are some cool looking platforms in British military history.

Nominal authority for firing missiles rests with the Prime Minister, but one of the powers of the Monarchy is the right to veto that (in the event, say, of the PM turning out to be a madman) or take over themselves. Submarine captains also have the authority to launch on their own, due to the historic nuclear threat being from Russia, which is close enough to erase Britain from the map before the sub can receive its orders.

Many of the weapons are referred to by their Rainbow Codes, a UK Code Name system.

As you will see, there are a lot of weapons that never saw squadron service, due to Government defence cuts.

Examples of Ultimate Defence of the Realm include:

The missiles -- Polaris and Trident are of American design and are discussed under Peace Through Superior Firepower.

With the V-force becoming rather vulnerable, the UK Government decided to go SSBN instead, with US technological help. Four of these subs were built. Containing 16 Polaris A3 missiles, they were in service from 1968 to the mid-1990s.

The successor to the Resolution class, entering service in 1996. Carrying 16 Trident D5 missiles, with a theoretical maximum of 192 warheads. However, what it actually has on board now (which could be as low as 12 sub-strategic warheads) remains classified and the government claims that readiness is now a matter of days rather than minutes. Four built.

The current system is getting a bit old and creaky and is due to be replaced around 2020. There is some Parliamentary support for the policy, although not as much as several years ago. Before the 2010 election, both the Conservatives and Labour planned to replace Trident; the existence of the anti-deterrent Liberal Democrats in the current coalition government means that other alternatives are being looked at, such as deferring the decision another few years, or even sharing the weapons with the French.

Britain ditched its tactical sea-based nukes along with the land-based ones in 1998. The below-listed carriers are all light ones under 25,000 tons displacement; the UK is only now building its first super-carriers.

Started in the closing years of the Second World War, the second four of these eight planned carriers were cancelled. Due to their design (non-angled flight decks), they proved unable to handle jets and were ultimately converted into "commando carriers", basically amphibious assault ships, before being retired, with one notable exception...

Let's do the conversion again: Hermes

A modification of the Centaur-design, completed in 1959, this was able to carry Buccaneers and Sea Vixen fighters, but not Phantoms. Converted into a "commando" carrier, then an ASW helicopter carrier, then getting a ski-jump to become a Harrier Carrier, In the last configuration it participated in the Falklands as the flagship of the Task Force, carrying up to 26 Sea Harriers and 4 ground-attack versions--Sandy Woodward[1] commented that losing Invincible would have been very bad, but losing Hermes would have ended the war right there.

Following that war, it was converted to commando carrier and back again. With Invincible no longer on the table post-Falklands, Australia was offered Hermes to replace HMAS Melborne, but declined after the Hawke government was elected in 1983. So they sold it to India instead, where it is nearing the end of its career as INS Viraat.

The three purpose-built "Harrier Carriers" that entered service in the 1980s- the first seeing service in the Falklands (just after it was proposed to be sold to Australia!). These vessels carried nuclear depth bombs until 1998 and used to carry Sea Dart SAM systems (also removed). Invincible is effectively out of service and the other two will soon follow.

A naval two-seater strike fighter, this was designed as a response to a Soviet cruiser type of the early 1950s, the Sverdlov class. Carrier and land-based versions were developed. The former were transferred to the RAF when Ark Royal left service. Subsonic, but very good at low-level (the RAF used to operate them at speeds of over 600mph, only 50ft off the ground. Over the sea, the Navy could fly them even lower!) this two-seater aircraft stayed in service until 1994. Turned up in the Gulf War, where its laser designator capability was pretty handy. Exported to South Africa (only), who used it in their bush wars - and would have carried their nuclear bombs if they ever used them.

A definite Cool Plane, this STOVL fighter could carry a nuclear depth bomb. Proved to be brilliant in the Falklands with a 22-0 record in air-to-air combat and was later upgraded for AIM-120 AMRAAM, much like the USMC Harriers. They also served in the Gulf War and Bosnia.

These fighters, although still in Indian service, were retired from British service in 2006, it not being deemed cost-effective to upgrade for only six years service (i.e. until the F-35 arrival). The remaining Harriers are of the GR.7/GR.9 variety.

Due to the shorter distance between the UK and Moscow, Britain has never felt the need for an ICBM programme. All of these programmes were cancelled before entering service.

Intended to be a silo-based deterrent for the UK, with a range of 3,700 kilometres/2,300 miles. Took half an hour to fuel, which with "four-minute warning" et al, would have been a bit of a problem had it not been silo-based. Went way over budget, was politically unpopular (you have to remember the South-East of England is not Nebraska) and not supported by the services. Cancelled in 1960 before a full flight-test. Attempt to use it as part of a space launcher didn't work because the parts that weren't Blue Streak kept not working.

The V-Force (so called because they all began with V)

Britain's first (and as it turned out, only) strategic jet-powered nuclear bomber force was made entirely up of their so-called "V-Bombers," from the fact that each bomber design was named with something starting with the letter "V." If the Cold War ever got nuclear, the entire "V-Force" would be assigned to support USAF Strategic Air Command, and would report directly to SAC whenever nukes were carried.

The RAF's nuclear weapons were removed from service in 1998.

The first of the "V-Bombers" and one of Britain's first jet bombers, conducting Britain's nuclear tests. Designed to fly higher and faster than contemporary fighters, technology (namely the S-75/SA-2 SAM) quickly caught up to it and it had to fly low and and slow to avoid Soviet radar. The extra turbulence from such flying meant that their structures were prematurely weakened, leading to an early retirement. Saw service during the Suez Crisis of 1956, being employed in the classic conventional carpet bombing role.

The second "V-Bomber" and the longest-lived as its large delta wing was best suited of the three designs for low-altitude flight, although this was by accident as again it was designed to fly higher and faster than contemporary fighters (but once again technology caught up with it). The only time it dropped weapons in anger was also one of the most interesting bomber operations in history: during the Falklands War, the RAF barely had enough time to hastily cancel the Vulcan's retirement, retrain the crews in air-to-air refuelling, and sent them on what was then the longest bombing mission in history, Operation Black Buck, to bomb Argentinian positions on Stanley Island. The modifications necessary for this operation involved tons of engineering improvisation. One has recently been restored to flying condition and is doing airshows.

The final member of the "V-Bomber" trio, the Victor was the fastest (in fact the only supersonic of the V-force, albeit only-just, and even then, not intentionally, but it remained flyable after landing from a supersonic sprint) and most advanced but was edged out in service as a bomber by the Vulcan - allegedly because Handley-Page refused to cooperate with the Government sponsored amalgamation of the British aero-industry. Nevertheless, it was the longest-serving of the trio as a tanker, last seeing action in Desert Storm. Had a distinctive crescent wing design that was once again optimized for high-altitude, high-speed flight, and like the Valiant did not fare too well at low altitudes. The Victor looks so futuristic that tankers stopping over at US air displays have reputedly been mistaken for a new British "stealth bomber."

Yes, that was its Code Name- you can just imagine a video of nuclear explosions to that tune)- the first British air-dropped weapon to become operational. Had a 16-KT yield (close to Hiroshima size), but appears to have suffered from reliability problems. Informally referred to as "Smallboy", because it was pretty big. Withdrawn after only four years in 1960-61.

The primary means the British had at striking far-off targets with a nuke; a huge missile (looking somewhat like a vastly overgrown Bullpup) with an equally huge warhead over 1 megaton and capable of speeds over Mach 2 with a range of over 150 miles. Designed to give the Vulcan a bit of an edge in survivability by allowing the launching craft to stay outside of Soviet defenses; the Victor was more or less designed around it. Soviet defenses caught up with it though, despite its long range, and it was retired in favor of the aforementioned Skybolt; Vulcans and Victors were pressed to use free-fall "dumb" nukes after the Skybolt's cancellation.

Not much more needs to be said that is not in Superior Firepower. Carrier and land-based versions. The former had the problem that the Ark Royal was just a bit smaller than the US carriers and was retired with that carrier in 1978 as the Fleet Air Arm (the Royal Navy's aircraft section) went STOVL.

An Anglo-French project to build a supersonic air support aircraft, which started off as separate trainer ideas. Not fitted with a radar, it was Sidewinder-capable. It was exported and is still under licensed production in India. In RAF service, it underwent a number of upgrades. However, the aircraft was controversially retired in 2007 as the Eurofighter Typhoon came in to save money- those in favour argued it was obsolete, those against disagreed..

Developed as part of the multi-national Multi-Role Combat Aircraft programme, this variant (there are electronic warfare and interceptor versions too, the latter about to retire) is in service with a number of countries. Successor to the Vulcan, this is a swing-wing two-seater strike aircraft. All remaining now converted to GR.4 standard and used solely in the conventional role. One notable squadron they serve with is 617 Squadron- "The Dam Busters".

First used in combat in the Gulf War, where it got handed the very dangerous task of attacking Iraqi runway. 6 aircraft were lost during this, with seven crew being killed. Two were captured by the Iraqis, getting the full "Baghdad Hilton" treatment.

The ones that didn't quite make it

Possibly one of the coolest looking aircraft in history, the TSR-2 was to the British equivalent to the US F-111. It got as far as a flying prototype and to all appearances would have been an entirely successful aircraft before it was cancelled, officially due to spiraling costs. Unofficially, there is a conspiracy theory that the US used economic blackmail to ensure its cancellation. The TSR-2 would have been in direct competition with the F-111 for export sales and it looked like was going to end up being faster, more capable and probably cheaper. A generation of British aviation fans resent its loss to this day.

A planned pair (at least) of 55,000 ton displacement fleet carriers that would have carried Phantoms and Buccaneers, as a replacement for the Centaurs. They got canned, with the TSR-2, in 1966.