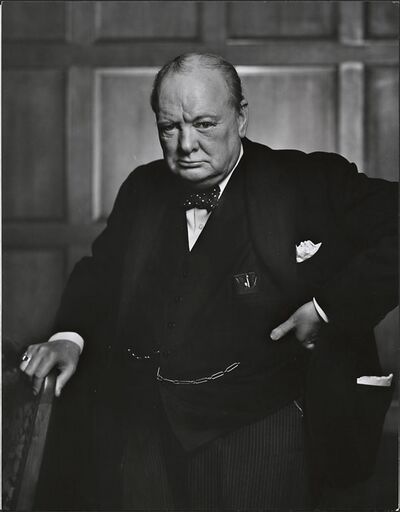 He does have a Win in his name.

Sir Winston Leonard Spencer-Churchill (1874-1965). Knight of the Garter, Order of Merit, Companion of Honor, Territorial Decoration, Her Majesty's Most Honourable Privy Council, Fellow of the Royal Society, first Honorary Citizen in United States history, and almost the Duke of London.

Switched political parties twice in his very long career (Conservative to Liberal, then back again). A very much beloved British Prime Minister, he is famous for his constant wit (e.g. Bessie Braddock MP: "You, sir, are drunk!" Churchill: "And you are ugly. Tomorrow morning, madam, I shall be sober."), his cigar-smoking (his scowl in the famous portrait, shown above, is because photographer Yousuf Karsh dared to take his cigar away) and the Victory salute ("the bird" inverted, although he didn't invert it.)

Winning a World War (and funding the invention of the tank) will get a lot of people to forget your less popular policies, and some were very unpopular. He resigned from the War Cabinet in World War I after the failure of Gallipoli and his opposition to Indian autonomy played a large part in his isolation in the 1930s. Furthermore, his second term as Prime Minister is generally regarded a lot less favourably than his first; the general rule is that he's considered a fine wartime leader, but not very suited to peacetime. In 1943, while PM, he did nothing to solve a famine in Bengal, which eventually killed 4 million people — instead expressing disappointment that Gandhi was not killed by it, however given that the war was getting increasingly desperate at that time, his distraction was somewhat understandable. He was also a noted racist, like most leaders and people at the time, believing that one should not help the Palestinians from subjugation by Israel, because "a superior race naturally conquers an inferior one", and supported the use of non-lethal gas on rebellious Iraqis and other "uncivilised tribes" who had been attacking those under nominal British protection.

He'd been in the army before going into politics and was also a war correspondent. As well as his Nobel Prize-winning book on the Second World War (not the most reliable source, but an invaluable memoir), he wrote a history of the English-speaking peoples and a largely forgotten political thriller called Savrola: A Tale of the Revolution in Laurania.

A real-life Bunny Ears Lawyer, he once had a meeting with Franklin D. Roosevelt while he was taking a bath, had little awareness of social mannerisms and sometimes wandered around his house naked. He more or less had a drink with him at all times, thus the, "You, sir, are drunk!", quote. He also suffered from depression, which he called his "black dog".

He was given a state funeral on his death in 1965, with a lot of leaders turning up. He is buried in a churchyard in Bladon, Oxfordshire. In a BBC series he was voted Greatest Briton of all time, and up until the funeral of Pope John Paul II his funeral was attended by the most heads of states.

Winston Churchill was notably a child of a binational marriage; his mother Jeanette Jerome was an American Socialite from Brooklyn. Compare Barack Obama.

Many of Churchill's quotes are rightly legendary, including:

Retrieved from "https://allthetropes.org/w/index.php?title=Winston_Churchill&oldid=1619721"
Categories:
Cookies help us deliver our services. By using our services, you agree to our use of cookies.