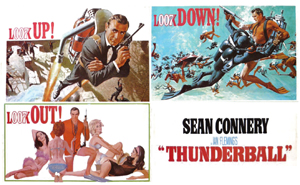 The fourth James Bond film, in which SPECTRE nicks a pair of nukes (from an Avro Vulcan), somebody gets the point permanently and there's a shark. Oh, and Tom Jones faints on the last note of the title song.

Thunderball was the first really massive Bond movie. Adjusting its box office tax for inflation, you produce a figure of over $950 million, above Harry Potter and The Goblet of Fire. On US and Canadian grosses alone, it is, according to The Other Wiki, the 26th highest grosser of all time, beating all of the Harry Potter movies (the "Potter grosses more than Bond" figure is inaccurate, since it doesn't adjust for inflation) and every one of the The Lord of the Rings movies.

The storyline of Thunderball was recycled for the non-canonical Bond film Never Say Never Again, in which a now much older Connery reprised his role as Bond. Sony pictures was at one time planning to remake Thunderball again, this time casting Connery as Ernst Stavro Blofield, but a court ruled against them in the matter of the rights to the James Bond character. (Through subsequent studio mergers, MGM acquired NSNA and the matter became moot.)

The book is notable for being perhaps the first story about terrorists stealing nuclear weapons and holding the world to ransom- a common enough trope in modern spy and action thrillers, but a revolutionary idea at the time. That's right, folks: James Bond invented nuclear terrorism.

Tropes used in Thunderball include:
Retrieved from "https://allthetropes.org/w/index.php?title=Thunderball&oldid=1759812"
Categories:
Cookies help us deliver our services. By using our services, you agree to our use of cookies.