We ARE Struggling Together! 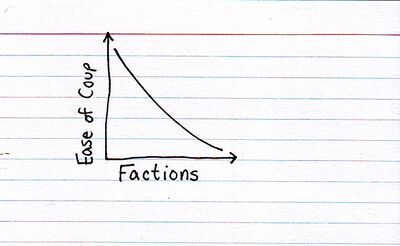 This trope in Index Card form!

"A heretic is someone who shares ALMOST all your beliefs. Kill him."

The government is evil, decadent, corrupt or all three and it's time for a revolution. Only one thing stands in the way: your fellow revolutionaries. All of you can agree on only one thing: The government must go. Beyond that, you and your fellow revolutionaries couldn't decide on pizza toppings, let alone the shape of the world to come (or how to get it there). This can lead to squabbling that prevents any coordinated action from taking place...or it can escalate to the point where the different revolutionary factions are spending as much time and energy shooting at each other as they are shooting at the ones in power.

Such factionalism is very common in the real world, and is usually very depressing, even deadly. Crank it up a notch, and it's comedy gold.

This is the 'before' picture of the obsessive bureaucracy. The definitive case where being right is more important than doing right (or doing much of anything).

Subtrope of Divided We Fall, specifically when the separate factions are not just ignoring each other or working in isolation but are actively engaged in conflict with each other. Contrast Enemy Mine, where two groups of people work together due to one common goal despite other differences in beliefs.

See also A House Divided, With Us or Against Us, and Misfit Mobilization Moment. And expect both (if not more) parties to subject each other to Poser Hating. Also compare Jurisdiction Friction for when two factions are bickering over a common goal from within one or more government agencies. Compare Not-So-Omniscient Council of Bickering.

When it's two heroes of the same cause fighting because they mistake each other for the villain, it's Let's You and Him Fight. When the heroes are directly manipulated into fighting each other by a villain, it's Divide and Conquer and/or a False-Flag Operation.

Examples of We ARE Struggling Together! are listed on these subpages: