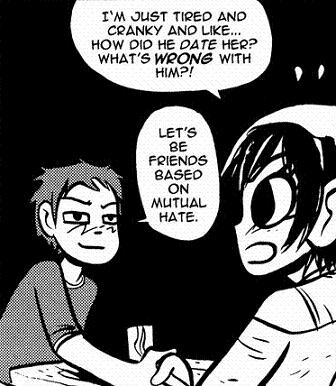 A shorter form of the phrase: The enemy of my enemy is my friend. Another phrase used to describe this is "War makes for strange bedfellows." This results in a scenario where foes must work together to achieve a common goal.

This type of team-up usually starts with the villain coming to the hero's aid, usually saying that a certain threat is a danger to them both, or "No one kills you but me!" when they save the hero from certain doom. After the team-up, the villain will usually let the hero live for now because they were so useful, so everything can return to status quo.

Frequently, if it is a goodie-baddie partnership, the baddie will look for opportunities to pull something that gets them a profit (or, in the case of really bad baddies, allows them to stab the goodie in the back).

Of course, the Status Quo Is God is usually maintained by the end, with the villain having returned to his evil ways after pitching in to defeat the external threat. Ungrateful Bastard. Except when it isn't, and there's creep towards Friendly Enemy status. Can become a Heel Face Revolving Door if it happens more than once.

Sometimes the baddie is more the hero's Worthy Opponent than a villain, and it's a pity to see them go back to their old rivalry in the end because together, they're a nearly unstoppable fighting force. (If they don't go back, it's Fire-Forged Friends.)

A good source of Foe Yay, whether due to the fact that the villain secretly does harbor feelings for the protagonist (a direct example) or simply realizes how boring and/or aimless his life would be without the protagonist. Compare Embarrassing Rescue, Gondor Calls for Aid. See also Enemy Civil War.

See also An Offer You Can't Refuse, Genghis Gambit, and Colliding Criminal Conspiracies. When there's no common enemy per se, it's Go-Karting with Bowser. If the villain saves the day without the hero's help, then Bad Guys Do the Dirty Work. If the villain in question is possessing the hero, but there's a greater threat the two must conquer together, this can result in a Symbiotic Possession. Contrast with We ARE Struggling Together!, where you have putative allies who end up backstabbing and/or infighting with each other.

As might be gathered by this point, this article is unrelated to passive defensive weapons planted by one's foes. Also not related to mines of the underground type; for that, see Underground Level or Minecart Madness.

Finally, this is an opportunity to show the villains as being more competent than they typically are. While they're defeated by the heroes week after week, the bad guys can actually contribute to the defeat of whatever threat they're teaming up with the heroes against.

Not to be confused with the Dennis Quaid movie/Barry Longyear story Enemy Mine. We also sincerely hope that you did not have a slip of the finger and ended up here instead of at Enemy Mime. For an enemy that is a mine, see Action Bomb, and for a different kind of mine which is filled with enemies, see Dug Too Deep.

Compare Nominal Hero, a character who fights for good even though their intentions are not heroic at all.

Examples of Enemy Mine include:

The second dialogue is that after they reveal their plans, and persuades the heros to make their escape with the medicine:

Retrieved from "https://allthetropes.org/w/index.php?title=Enemy_Mine&oldid=1966408"
Categories:
Cookies help us deliver our services. By using our services, you agree to our use of cookies.