A Flock of Seagulls

Everything About Fiction You Never Wanted to Know.
Jump to navigation Jump to search
/wiki/A Flock of Seagullscreator 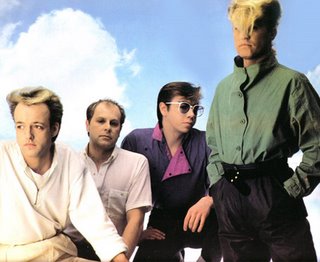 Hairdresser Mike Score (lead vocals, keyboards) formed A Flock of Seagulls with his brother Ali (drums) and fellow hairdresser Frank Maudsley (bass) in 1980, adding guitarist Paul Reynolds several months later. The group released its debut EP on Cocteau Records early in 1981, and while the record failed to chart, its lead track, "Telecommunication," became an underground hit in Euro-disco and new wave clubs. The band signed a major-label contract with Jive by the end of the year, and their eponymous debut album appeared in the spring of 1982. "I Ran (So Far Away)" was released as the first single from the album, and MTV quickly picked up on its icily attractive video, which featured long shots of Mike Score and his distinctive, cascading hair. The single climbed into the American Top Ten, taking the album along with it. In the U.K., "I Ran" didn't make the Top 40, but "Wishing (If I Had a Photograph of You)" reached number ten later that year; in America, that single became a Top 40 hit in 1983, after "Space Age Love Song" peaked at number 30. "Wishing" was taken from the group's second album, Listen (1983), which was moderately successful.

Mike Score's distinctive hairstyle, dubbed "the flock of seagulls" hairdo has been mentioned, copied, and parodied many times in the media even though the hairdo first appeared in Xanadu with the band The Tubes.

Their songs other than I Ran (So Far Away) include:

A Flock of Seagulls provides examples of the following tropes:
Retrieved from "https://allthetropes.org/w/index.php?title=A_Flock_of_Seagulls&oldid=1630198"
Categories: