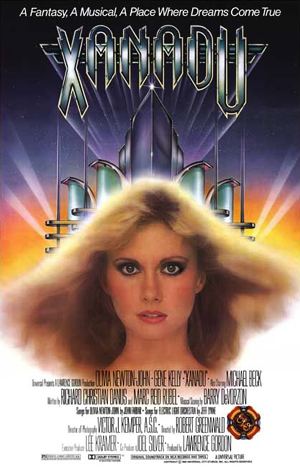 Where time stops and the magic never ends.
—Xanadu tagline.

What has Olivia Newton-John, Gene Kelly, that guy from The Warriors, roller skates, lots of glowing blue people, quasi-disco music, and is nothing but a string of Non Sequitur Scenes?

The 1980 movie musical Xanadu is a timeless story about a frustrated artist named Sonny Malone (the guy from The Warriors) who paints album covers for a living and is unhappy about it. By tossing some of his drawings into the wind, he somehow brings a painting on a wall of nine girls to life. One of them—Kira—finds and kisses him. Shortly after, he meets Danny McGuire, a former big band leader. The two strike up a friendship and, with encouragement from Kira, make plans to convert an abandoned building (The Pan Pacific Auditorium) into a roller disco. Sonny and Kira meanwhile fall in love, with there being the slight complication that she's actually Terpsichore, the Muse of Dance and Choral Singing (yes, really) and was only sent to bring Xanadu into creation. Soon, she will have to return home, just as Xanadu will be opening.

The roller disco (and film's) title comes from the poem "Kubla Khan" and refers to a province where Khan establishes his pleasure garden.

Widely panned by critics, it found a cult audience with adolescent girls and gay men. It has now been adapted into a stage musical that doesn't even bother to hide how camp the whole thing is.

Tropes used in Xanadu include:

Danny: Opening night...whatever you want, it's on the house! You know, I've always wanted to say that line!